Every Muslim owes a debt of gratitude to him! 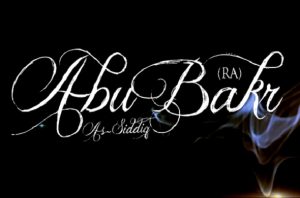 This great man managed to unify Arabia and his reign was the basis for the Islamic Ummah we see today.

In physical appearance, Abu Bakr was a slender man with a slightly bent waist that the cloth that he wore round it often slipped down before he fastens it many times. He was very gentle and tender-hearted. He used to recite the Qur’an in a sad heart-touching voice awakening the hearts of the people of Makkah when particularly reciting:

And, O my people! What ails me that I call you unto deliverance when ye call me unto the Fire? You call me to disbelieve in Allah and ascribe unto Him as partners that whereof I have no knowledge, while I call you unto the Mighty, the Forgiver. Assuredly that whereunto ye call me hath no claim in the world or in the Hereafter, and our return will be unto Allah, and the prodigals will be owners of the Fire. (Ghafir 40:41:43)

Abu Bakr (may Allah be blessed with him) was an eloquent reciter of the Qur’an. His recitation attracted the people of Makkah who were gathering around his house to listen to him. When the leaders of Quraish knew about that, they sent someone to ask the Prophet (peace be upon him) to “ask his friend not to pray in public as his recitations ruined their boys” … meaning their slaves who were yearning to the call of freedom that recognizes absolute equality between humans irrespective of any distinction of color, race or tribe …

Abu Bakr fought against the forces of slavery and racism, purchasing the freedom of slaves. The first of the slaves set free by him was Bilal.

We see this soft gentle nature of Abu Bakr disappearing when the shocking great news of the Prophet’s death spread, turning the Arabian Peninsula upside down.

The Companions of Prophet Muhammad were in shock and confusion. Some of them took the corner of the Mosque in silent and grief.

Before his death, Allah’s Messenger (peace be upon him) had ordered the mobilization of a large army to march to (now) Jordan under the command of Usama Ibn Zayd.

While the army was ready for war, the Prophet began to suffer from the sickness.

The first issue that Abu Bakr as a Caliph was called upon to decide was whether army- halted outside Al-Madinah- should proceed to its destination, or should it be abandoned due to the danger to which Madinah was exposed following the death of the Prophet.

Abu Bakr saw that it was the wish of the Prophet that the army should be sent to Jordan and it should be fulfilled at all costs.

“Who am I to withhold the army that the Prophet had ordained to proceed? Come what may: let Madinah stand or fall; the Caliphate live or perish, the command of the Holy Prophet shall be carried out.”, said Abu Bakr.

The view of Abu Bakr reflected his faithfulness and loyalty with the unwavering faith that whatever the Prophet had ordered was in the best interests of the community.

Thus, on the third day after the Prophet’s death, the Caliphate Abu Bakr announced the departure of Usama’s army, as were the commands of Allah’s Messenger.

After twenty days march the army reached Palestine and fought the Romans. Usamah returned to Madinah with a great victory and no losses proving the certainty of Abu Bakr’s faith and the strength and integrity of the Muslims as well.

The victory came at the most critical time of unrest and disorder. The victory news spread around entire Peninsula. It was the powerful beginning of Abu Bakr’s caliphate and war against the apostates.

Abu Bakr’s reign lasted for 2 years, 3 months, and 8 days. Here we will address four key features of his caliphate:

1- His War of Apostasy: A Comprehensive View of the Last Message

As Al-Aswad Al-`Ansi, Tulayha Ibn Khuwaylid, Sajah, Musaylamah claimed prophethood, turning many tribes like Muzhig followed Al-Aswad; Banu Asad, Ghatfan Tai’ and Al-Ghawth who followed Tulayha; Banu Taghlab and Banu Tamim who followed Sajah and Yemen which followed Musaylamah who canceled the ritual of Prayer. Also, Luqayt ibn Malik Al-Azdi claimed Prophethood in Oman. They all sent delegations to Abu Bakr to negotiate with him as regarding the cancellation of some of the obligation and pillars of Islam topped by zakah. Abu Bakr replied with his well-known word, “I swear by Allah that if they were to refuse me a rope of camel which they used to pay the Messenger of Allah, I will fight with them over the refusal of it.”

“`Umar said: ‘O Abu Bakr! How can you fight the people when the Prophet of Allah (peace be upon him) has said: ‘I have been ordered to fight the people until they say: ‘There is no God but Allah’ and whoever says this, makes himself and his property inviolable except by legal right, and his reckoning is with Allah?’ Abu Bakr replied: ‘By Allah! I will fight whoever made a distinction between salah and zakat, for zakat is a lawful right upon the property!”

This how comprehensive and firmly intact was Abu Bakr’s view of Islam as a whole.

When `Umar also asked him to go a bit slow, he taunted him: “I need your support and you let me down! Were you strong in pre-Islamic days to have become a coward now?”

2- If Apostates Had Succeeded, There Would Have Been No Islam

This firm attitude from a tender-hearted skinny man was a fence to protect the wholeness and unity of the religion and its pillars from breakdown. Following Musylamah, people began to give up the Salah, and withhold the zakah, coming up with a new religion that has nothing to do with true Islam; a religion guided by individual desires, by defaced and disintegrated beliefs and principles, and racist inclinations. The religion, then, would have been a region-based weird set of rules like that of the Mongols. But Islam is the religion of sound fitrah (natural inclinations of man) and healthy mind; a guidance for all time, addressing the whole humanity and integrating all domains of human life.

This is how Abu Bakr fought to protect the true religion of God from distortion and innovations without sacrificing the rulings of its pillars of salah and zakah.

In the hadith narrated by Bakr:

When the Prophet (peace be upon him) was asked by some of his Companions: “Is Allah near so we invoke him or is he far so we call him? so Allah revealed the verse: “When My servants ask you concerning Me, I am indeed close (to them): I listen to the prayer of every suppliant when he calls on Me: Let them also, with a will, Listen to My call, and believe in Me: That they may walk in the right way.” (Al-Baqarah 2:186)

Where, other than Islam, can one find such guidance!

If those apostates had succeeded to spread their new invented religion, nothing of these teachings would have been reached us.

3- Majority Is Not A Precondition for Decision-Making

Another lesson we can learn is that Abu Bakr’s opinion was not a majority’s. Thus, shura (consultation) in Islam is not binding for the ruler if he has an opinion opposed to the majority. Shura, in this respect, is advisable and not strictly necessary. Almighty Allah says, “So pardon them and ask forgiveness for them and consult them in the matter. And when you have decided, then rely upon Allah. Indeed, Allah loves those who rely (upon Him).” (Ash-Shura 3:159)

This is the basis of the principle of separation of powers, a term coined in modern times by these French political thinker Montesquieu and was adopted by the ancient Romans. They divided the state powers into executive power, the legislature and the judiciary. If the judiciary was clearly independent, the executive power fluctuated between the systems. Yet, the Shura principle is a criterion, and the head of state has to exercise his powers after that advice is done by Shura or consultation. This what Abu Bakr has done, to make consultation and thereafter make use of his powers even if being opposed by the majority.

At strategic level, Abu Bakr left to his successor, `Umar, a united Arabia. Without this unity, Islam would have never been spread beyond the caliphate’s borders., to West, East and North.

Abu Bakr managed to unify these rebellious factions and his reign was the basis for the Islamic Ummah we see today.

`Umar would often say that he would prefer to be a hair on the chest of Abu Bakr.

Back to the situations and words that show Abu Bakr’s firm character:

May Allah have mercy on this great man.

May Allah Almighty bless him and reward him for what he had done for the Muslim Ummah.