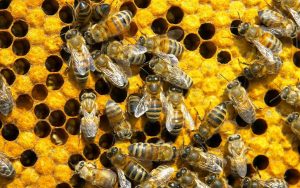 It is God, to Whom all beings are subjected, that causes bees to accomplish these feats.

All beings in the universe, either living or non-living, are under God’s command. They can act only if He wills. They can only perform those tasks which He wills. For example, honeybees, who produce more honey than their actual need, could not possibly know that honey is beneficial to humans; nor could they be aware of the precise chemical composition that makes it so useful and delicious. In fact, in addition to not knowing why they produce an abundance of much honey, nor could they possess the intelligence to construct the orderly hexagonal honeycombs, each of which is a miracle of design and mathematics. It is God, to Whom all beings are subjected, that causes bees to accomplish these feats. That bees act in compliance with God’s command is related in the Qur’an as follows:

“Your Lord revealed to the bees: ‘Build dwellings in the mountains and the trees, and also in the structures which men erect. Then eat from every kind of fruit and travel the paths of your Lord, which have been made easy for you to follow.’ From inside them comes a drink of varying colours, containing healing for mankind. There is certainly a Sign in that for people who reflect.” (Al-Nahl: 68-69)

Bees’ compliance with God’s commands in the manner in which they conduct themselves is not an anomaly. God provides us with this example to allow us to understand that all beings, including man, act by His Will. The Qur’an indicates that this is a sign for those who reflect. All beings are entirely subjected to His command:

“Everyone in the heavens and earth belongs to Him. All are submissive to Him.” (Al-Rum: 26)

Some religions consider Satan to be a being apart from and independent of God. Some attribute individual power to Satan. However, both opinions are incorrect. Satan, as well as the disbelievers who follow him, are subjected to God’s Will. God created Satan to put man to test, and endowed him with the ability and authority to call mankind to disbelief. God’s address to Satan is related in the Qur’an:

“He (God) said, “Get out! you are accursed! My curse is upon you until the Day of Reckoning.” He (Satan) said, “My Lord, grant me a reprieve until the Day they are raised again.” He said, “You are among the reprieved until the Day whose time is known.” He said, “By Your might, I will mislead all of them except for Your chosen servants among them.” He said, “By the truth—and I speak the truth— I will fill up Hell with you and every one of them who follows you.” (Saad: 77-85)

Just as man is, Satan is also entirely under God’s control and subjected to His Will. He is not a being possessing a will apart from and independent of God; he can neither make such decisions nor carry them out. In the trial set for human beings in this life, he is merely a being that is expected to distinguish the righteous from the corrupt.