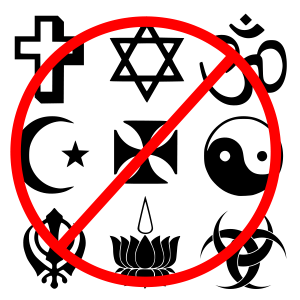 No matter how they try to tell me how good their religion is, I’m still strongly convinced by what I’ve learned from history: that RELIGION IS EVIL, RACIST, HOMOPHOBIC, and CLOSED-MINDED

I Believe in One God but Not in Religion!

The following is a unique case that was presented to one of the counselling websites. It is in the form of a question and an answer. The questioner raises the issue that he does believe in the existence of One God, but at the same time, he refuses to acknowledge any religion whatsoever. To this unique and perplexing question by Waleed Ahmed Najmeddine is giving an extensive and rational answer. Join us to go through the question and answer thoroughly.

I’m a MONOTHEIST. I believe that there is ONE GOD who created everything. I believe that our primary purpose in this life is to worship GOD and do good for the betterment of humanity and the world. I always try my best to be a good person and try to help others as much as I can, because I believe that this pleases GOD. However, unlike most people, I DO NOT BELIEVE IN ANY RELIGION. I’m not a member of any religious group. I’ve been studying history for a long time and I have come to the conclusion that religion is evil because it has caused so much suffering in this world. It divides people instead of bringing them together. I’ve talked with many people from different religions (including Islam) and they have tried to convince me to join their religion, but I’m still not convinced. No matter how they try to tell me how good their religion is, I’m still strongly convinced by what I’ve learned from history: that RELIGION IS EVIL, RACIST, HOMOPHOBIC, and CLOSED-MINDED (forgive me if I sound harsh, but that’s what I honestly believe). I’m a strong believer in HUMAN RIGHTS, but Religion has violated so many fundamental human rights throughout history. I’m an open-minded person. I believe in the GOLDEN RULE and I also believe that everyone should have the freedom to do whatever they want, as long as it doesn’t hurt anyone or interfere with other people’s freedom to do whatever they want. According to your religion (Islam), will I go to hell just because I am not a member of your religion? Even though I try my best to be a good person?

Thank you for your question and for contacting us.

Who defines what a good person is? Good and bad can be relative terms. What is good for one can be bad for another. If the majority opinion is to be the determining factor of what is good or bad, then the majority can often be wrong and multitudes can be easily swayed.

If it is each individual who decides what is right or wrong, or everyone is free to do whatever they want, so long as they don’t hurt others, this can lead to anarchy where there are no real limits to individual behaviour, something we are not far from today, especially in western societies.

Religions attempt to unify people, not to divide them. It is only those who have no concern for how their actions affect others, or who favour extreme self-interest over the interests of the community who cause problems for everyone. Those who strive to bring people together, to hold each other to account for their treatment of each other, who care about the feelings and opinions of others, are those who make this world a better place.

People of religion are more often than not found in this group. The closest equivalent of The Golden Rule in Islam comes from a saying of Prophet Muhammad, peace be upon him, “Love for your brother what you love for yourself”. It is not possible to claim Islam as your faith if you do not seek peace, prosperity and justice for others, regardless of their religious beliefs or even their absence of faith. Their membership in humanity is reason enough to treat them with the utmost respect, generosity and kindness.

Membership in a religion is not a road that leads to war and oppression unless an individual has the intention to use it for this purpose. It is God who is worshiped, but different religions claim to have the best path to reaching God. Only Islam, as a tenet of faith, acknowledges the truth in other religions.

Christianity excludes from salvation anyone who does not accept Jesus as the son of God, and although converts are accepted, Judaism is largely a tribal religion where bloodlines are very important.

To claim that all religions are the same and evil is to avoid the hard work of seeking the truth and trying to determine what it is that God wants, likes, dislikes, allows and forbids. It is an attempt to refuse control over our wants and desires from anyone or anything, to take oneself as one’s lord, but this is a true recipe for disaster.

Should one whose understanding is limited, imprison himself in his own understanding? Or should he seek the source of true knowledge, wisdom and understanding to be released from this self-imposed prison?

Religions preach similar messages of peace, charity, forgiveness, truth, justice, etc. This cannot be evil. We should never blame the shortcomings of individuals or groups within a religion on the religion itself. If a religion is to be criticized, it should not be for what those who claim to follow its practice but for what the religion preaches to its followers. It is the lack of charity, forgiveness, truth, justice, etc. in the hearts of people that causes the evil we see all around us, not religion itself.

The reason that Christianity and Islam are followed by almost half the world’s population is because they have an appeal to humanity. Nothing that unifies that many people, literally billions, can be inherently evil. Anyone who claims that Islam teaches hatred toward non-Muslims is either ignorant or a liar. The same goes for any such claims against Christianity, Judaism, or any major world religion.

I am not saying that all religions are the same or equal, but their goals are to bring peace and justice to the lives of their followers. The problem comes from the interpretation of religious doctrines. Not all human beings have universal peace, respect, and kindness in their hearts. Very few are endowed with wisdom and love for humanity. Fewer still are willing to sacrifice for the sake of others, putting the interests of others before themselves.

Many people perform terrible acts upon others in the name of their religion, but they do not represent what the religion teaches. It is a prejudiced heart and mind that views the actions of an individual and paints others with similar backgrounds or beliefs with the same brush. This is unfair and shows a true disinterest in getting to know people as individuals.

Painting everyone with the same brush is an easy way to avoid the hard work of getting to know someone intimately, on a personal level. Many believe that terrorism is a pillar of Islam and that Jihad is synonymous with it, but the truth is that terrorism goes against the very core of Islamic teachings.

If you are an open-minded person as you say, then you must avoid painting the masses of peace-loving followers of religion with the brush of the misguided, narrow-minded individuals that happen to be members of a particular religious group. These people can be found in every religion, culture, or ethnic group. It would not be fair to say that all Germans, for example, are Nazis at heart, when history and modern society proves otherwise.

So to answer your question about whether or not Islam teaches that you as a non-Muslim are destined for Hell, I will say this. It is only for God to decide who will enter the Hell-fire, for how long, or who will be saved from it.

In Islam, the Qur’an is the unfiltered, untainted Word of God and the criterion for determining what is right and wrong for all humanity, not just those who believe in it. The Truth is not affected by the failure of some to recognize it for what it is.

A dying man would be a fool to refuse a life-saving medicine, just because he doesn’t like its taste. The Qur’an is to be taken as a whole, not picked apart and used to justify evil practices.

By the same token, it is not merely membership in Islam that grants one admission to Paradise. It is only God’s Mercy that saves an individual from the Hellfire, and only God’s Mercy that grants one admission to Heaven. Islam teaches that many Muslims will enter the Hell-fire, some will stay for a short time, some for a long time and some will stay forever as a result of their hypocrisy. Some will be fortunate enough to avoid the Hell-fire completely.

Having said that, there are verses in the Qur’an that state,

“Those who believe (in the Qur’an), and those who follow the Jewish (scriptures), and the Christians and the Sabians,- any who believe in God and the Last Day, and work righteousness, shall have their reward with their Lord; on them shall be no fear, nor shall they grieve.” (Al-Baqarah 2:62)

Also, Allah says in the Ever-Glorious Qur’an what means:

“Those who believe (in the Qur’an), those who follow the Jewish (scriptures), and the Sabians and the Christians, – any who believe in God and the Last Day, and work righteousness,- on them shall be no fear, nor shall they grieve.” (Al-Ma’idah 5:69)

The above verses are very clear and difficult to misinterpret. They really make me wonder how anyone can accuse Islam of wholesale condemnation of non-Muslims, or of having evil intentions and hatred towards Jews and Christians, just because they do not believe what Muslims believe.

I hope this has been helpful to you. Please keep in touch.

Waleed Ahmed Najmeddine is a Canadian born Muslim and public school administrator. He has been an active member of the Muslim community for over 15 years, educating Muslims and non-Muslims alike about Islam. He is currently pursuing a master’s degree in leadership and school improvement.