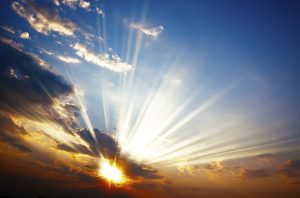 Feeling the Hereafter is related to the degree of certainty of faith.

What Is Your Goal?

The Prophet (peace be upon him) warned us against striving only for this world. But this does not mean that we neglect the worldly affairs and leave them to those who do not use them the right way under the pretext that we are devoting our life to the Hereafter. This is a wrong understanding. What the Prophet means is that we should not forget the Hereafter.

The Prophet is reported to have said: “One whose main concern is this worldly life God will make his poverty between his eyes.”  (Ibn Majah)

When you open your eyes in the morning, ask yourself: what is your goal? Is it the Hereafter? Is it what is between you and God? If it is the case, God will grant you contentment and cause this worldly life to come to you despite your indifference about it.

On the other hands, if one opens his eyes in the opening thinking of so and so or such and such of worldly matters, or how to gain such and such of worldly matters, even it is lawful, the Prophet says about this person: “God will make his poverty between his eyes.” This means that he will not be satisfied with whatever he gains and achieves. Rather he will feel that he is still suffering poverty and need.

Between Faith the Hereafter

The Hereafter is an important concept that we should not overlook. The question is how to reach the level of thinking of the Hereafter? How to always call it to our minds?

When you worship God in all the various kinds of worship, the certainty of faith in your heart increases and you will remember the Hereafter as if you are living it. The Prophet’s companions experienced this feeling when they studied the Qur’an and worshipped God with him. It is reported that one of the companions said about the impact of worship, “As if we see the heaven and hell with our eyes.” (Ibn Majah)

… without forgetting, withal, your own (rightful) share in this world; and do good (unto other) as God has done good unto you… (Al-Qasas 28:77)

Then the Sheikh says: “… and you will see the trappings of this world vanishing before your eyes.” This means that this world is of a continuous state of vanishment. Al-Hasan Al-Basri once said: “Son of Adam! You are nothing but a number of days, whenever each day passes then part of you has gone.”

The Sheikh says that if you have deep belief in the Hereafter, you will see this world vanishing before your eyes. This will make you indifferent about it and its pleasure and draws you nearer to the Hereafter and the rituals. We are in a much need of this proper understanding because we always forget the Hereafter and do not think about death.

The Prophet (peace be upon him) saw some companions praising a man because of his good deeds. The Prophet asked them if he used to remember death. They said: We did not hear mentioning death. Then the Prophet said: “Your friend is not there.” This means that he will not reach the high degrees of Paradise because he did not remember death as remembering death makes one ready for the Hereafter.

Success in Both Worlds

If one desires the rewards of this world, (let him remember that) with God are the rewards of (both) this world and the life to come: and God is indeed all-hearing, all-seeing. (An-Nisaa’ 4:134)

There is no harm if we care for the enjoyment of this life. But life should remain in our hands not in our hearts. This is the correct definition of zuhd (indifference about this world), i.e. to hold this world in your hand, but not letting it into your heart.