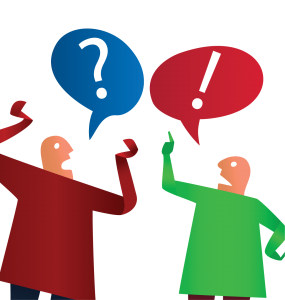 If my expression is not clear, do not interpret it in a negative way.

In mathematics, if someone says, 5 + 5 = 10; another says, 6 + 4 = 10; and a third says, 1 + 9 = 10, one can safely say that all three are quite right but in different ways. Each one of these three persons is right as he sees things from his own perspective and in a way that suits his own Weltanschauung. This is the way we see the world around us. Weltanschauung is German term that was borrowed by the English language and which stands for how one, a group of people or a whole community sees the world, humanity, religion, and the whole universe. Shortly, it stands for viewing the world and all it encompasses from a different and unique perspective.

Most of our communication problems arise from two main things: (a) a misunderstood meaning, and (b) an unintended meaning.

Sometimes, one may get angry because he misunderstood someone’s saying or remark; while another may get exasperated because he understood something that was not intended at all by the speaker or the one who uttered it.

Notwithstanding, the question that begs answering here is: How can we solve these two main problems?

These two problems can be easily solved if we: (a) ask that person to explain what he means, and (b) if we think good of that person.

So, if someone says something that you may get wrong, hasten to ask him about what he meant to say and to make himself clear on the issue at hand. And, if someone says something unintentionally and you find it offensive or insulting, you should think good of him and stop yourself from thinking bad of him or his intentions. Allah, the Almighty mentions this in Surah Al-Hujurat where He, Glory be His, says what means,

“…verify it, lest you hurt some folk in ignorance and then regret what you have done.” (Al-Hujurat 49: 6)

The bottom line is…

If my expression is not clear, do not interpret it in a negative way. Think well of me and do not judge me, or anyone else, for a slip of the tongue or a bad word that was not intended at all. Be merciful so that others will be merciful to you!

As believers, today we perform the prayer together in the same congregation; however, tomorrow, who knows, maybe one of us performs the Janazah (Funeral Prayer) for the other so as to seek Allah’s Mercy for the deceased – myself or yourself!

There is nothing in this temporary life that deserves our disagreement or conflict or hatred. The title of this whole life, with all its vanities and temporary pleasures, is what the Qur’an teaches us,

While the title of the hereafter is,

“Abiding eternally therein. Good is the settlement and residence.” (Al-Furqan 25: 76)

Given this, one should do good deeds, forgive others, ignore the insult, seek Allah’s forgiveness, give out in charity, and give a helping hand to the needy and the poor ones. Last but not least, we should respect our differences and try to work on our disagreement.

Dr. Ali Al-Halawani is Assistant Professor of Linguistics and Translation, Kulliyyah of Languages and Management (KLM), International Islamic University Malaysia (IIUM), Kuala Lumpur, Malaysia. He was Assistant Professor and worked for a number of international universities in Malaysia and Egypt such as Al-Madinah International University, Shah Alam, Malaysia (Mediu) and Misr University for Science & Technology (MUST), Egypt; Former Editor-in-Chief of the Electronic Da`wah Committee (EDC), Kuwait; Former Deputy Chief Editor and Managing Editor of the Living Shari`ah Department, www.islamOnline.net; Member of the International Union of Muslim Scholars (IUMS); member of the World Association of Arab Translators & Linguists (Wata); and a member of the Malaysian Association of Applied Linguistics (MAAL). He is a published writer, translator, and researcher. You can reach him at alihalawani72@hotmail.com.