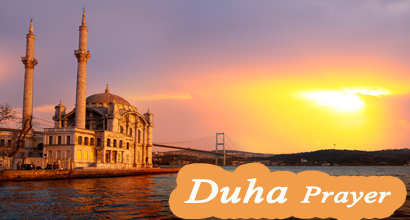 Salat Ad-Duha is a prized prayer and whoever wishes to earn reward should pray it, while there is no blame upon the one who does not pray it.

The Excellence of the Duha Prayer

Many hadiths describe the excellence of the Duha (Forenoon) prayer as follows:

Buraidah narrated that the Prophet (peace be upon him) said: “In a human (body) there are 360 joints and man must make a charity for each one.” The people said: “Who can do that, O Messenger of Allah?” He responded: “One may cover the mucus that one finds in the mosque or remove something harmful from the road. If one could not do that, he could pray two rak`ahs of Duha and that will be sufficient for him.” (Ahmad and Abu Dawud)

Talking of the legal import of these hadiths, Ash-Shawkani says: “These two hadiths point to the greatness, excellence, and importance of the Duha prayer, stressing its legality as its two rak`ahs suffice for 360 charities. Something like this should be performed regularly and persistently.

The hadiths also establish the importance of saying ‘Glory be to Allah’, ‘Praise be to Allah’, and ‘There is no God but Allah.’ And [the importance of] ordering the good, eradicating the evil, removing the spittle, removing what is harmful from the path, and such other acts that will fulfill what is required of a person of daily charities.”

An-Nawas ibn Sam`an (may Allah be pleased with him) related that the Prophet (peace be upon him) said: “Allah said: ‘Son of Adam, do not fail in performing four rak`ahs in the early day as it will be sufficient for the latter part of the day.”‘ ( Al-Hakim and At-Tabarani )

Abu Hurairah (may Allah be pleased with him) said: “My friend [the Messenger of Allah] advised me to do three things: fasting three days of every month, praying the Duha prayer, and praying the witr prayer before I sleep.” (Al-Bukhari and Muslim)

Salat Ad-Duha is a prized prayer

Salat Ad-Duha is a prized prayer and whoever wishes to earn reward should pray it, while there is no blame upon the one who does not pray it.

Recommended time for the Duha prayer

The time for Duha begins when the sun is about a spear’s length above the horizon and it continues until the sun reaches its meridian. It is preferred to delay it until the sun has risen high and the day has become hot.

Zaid ibn Arqam (may Allah be pleased with him) relates: “The Messenger of Allah (peace be upon him) went to the people of Quba’, and they were performing Duha, and he said: ‘The prayer of devotion should be observed when the young weaned camels feel the heat of the sun.’” ( Ahmad, Muslim, and At-Tirmidhi)

Number of rak`ahs for the Duha prayer

The minimum number of rak`ahs to be prayed is two, as was mentioned in the hadith of Abu Dhar. The most that the Prophet (peace be upon him) performed was eight rak`ahs, whereas, the most he mentioned was twelve rak`ahs.

Some people, such as Abu Ja`far At-Tabari, Al-Mulaimi, and Ar-Ruwyani, who subscribes to the Shafi`i school, say there is no maximum limit to the number of rak`ahs that one may perform for Duha.

Al-`lraqi says, in the commentary on Sunan At-Tirmidhi: “None of the companions or followers are known to have restricted it to twelve rak`ahs.” As-Syuti agrees with it.

Ibrahim An-Nakha`i reports that Al-Aswad ibn Yazid was asked: “How many rak`ahs are to be prayed for Duha?” He answered: “As many as you wish .”

`A’ishah (may Allah be pleased with him) reports: “The Prophet (peace be upon him) would pray four rak`ahs for Duha and would add to it whatever Allah willed.” ( Ahmad, Muslim, and ibn Majah)