`Eid Al-Adha is the tenth day of Dhul-Hijjah, the last month of the Hijri or Islamic calendar. It is, as the Prophet (peace be upon him) said: “The greatest day in the sight of Allah, may He be blessed and exalted, the Day of Sacrifice . . .” (Abu Dawud) 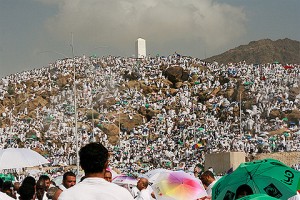 `Eid Al-Adha is the tenth day of Dhul-Hijjah, the last month of the Hijri or Islamic calendar.

It is also the greatest day of Hajj, as the Prophet (peace be upon him) told us.

The reason why it is described as the greatest day of the year is that it combines so many acts of worship which are not combined on any other day, such as the `Eid prayer, offering the sacrifice, reciting Takbir (glorifying Allah), and widespread remembrance of Allah.[1]

The recommended acts of Sunnah on the day of `Eid are as follows:

1 – Taking a Bath before Going out to the Prayer

Al- Nawawi (may Allah have mercy on him) said that the Muslims were unanimously agreed that it is recommendable to take a bath for the `Eid prayer.

The reason why it is desirable is the same reason as that for taking a bath before Jumu`ah and other public gatherings. Rather, on `Eid the reason is even stronger.

2 – Eating after the Prayer on `Eid al-Adha

On `Eid al-Adha it is recommended not to eat anything until one comes back from the prayer, so he should eat from the udhiyah (sacrifice) if he has offered a sacrifice. If he is not going to offer a sacrifice, there is nothing wrong with eating before the prayer.

This is one of the greatest Sunnahs on the day of `Eid because Allah says:

(He wants that you) must complete the same number (of days), and that you must magnify Allah [i.e. to say Takbir (Allahu Akbar: Allah is the Most Great) for having guided you so that you may be grateful to Him” (Al-Baqarah 2:185)

The time for Takbir on `Eid Al-Adha begins on the first day of Dhul-Hijjah and lasts until sunset on the last of the days of Tashriq.

Al-Daraqutni and others narrated that on the morning of `Eid al-Fitr and `Eid al-Adha, Ibn `Umar would strive hard in reciting Takbir until he came to the prayer place, then he would recite Takbir until the imam came out.

Saying Takbir when coming out of one’s house to the prayer place and until the imam came out was something that was well known among the Salaf (early generations). Nafi’ ibn Jubayr used to recite Takbir and was astonished that the people did not do so, and he said, “Why do you not recite Takbir?”

Ibn Shihab al-Zuhri (may Allah have mercy on him) used to say, “The people used to recite Takbir from the time they came out of their houses until the imam came in.”

The time for Takbir on `Eid Al-Adha begins on the first day of Dhul-Hijjah and lasts until sunset on the last of the days of Tashriq.

The etiquette of `Eid also includes the congratulations and good wishes exchanged by people, no matter what the wording, such as saying to one another “Taqabbala Allah minna wa minkum” (May Allah accept (good deeds) from us and from you” or “`Eid mubarak” and other permissible expressions of congratulations.

It was narrated that Jubayr ibn Nufayr said: When the companions of the Prophet (peace be upon him) met one another on the day of `Eid, they would say to one another, “May Allah accept (good deeds) from us and from you.”

Undoubtedly these congratulations are among the noble characteristics among the Muslims.

5 – Adorning Oneself on the Occasion of `Eid.

It was narrated that Jabir (may Allah be pleased with him) said: The Prophet (peace be upon him) had a cloak which he would wear on the two `Eids and on Fridays. (Ibn Khuzaymah)

So a man should wear the best clothes that he has when going out for `Eid. With regard to women, they should avoid adorning themselves when they go out for `Eid, because they are forbidden to show off their adornments to non-Mahram men. It is also haram for a woman who wants to go out to put on perfume or to expose men to temptation, because they are only going out for the purpose of worship.

6 – Going to the Prayer by One Route and Returning by Another.

It was narrated that Jabir ibn `Abdullah (may Allah be pleased with him) said: “On the day of `Eid, the Prophet used to vary his route.” (Al-Bukhari)