Muslims are encouraged to perform ghusl before they gather for the Friday Prayer. In fact, Islamic law even goes to the extent of ordering one to perform ghusl at this time as part of the overall cleanliness and hygiene of the Muslim society. 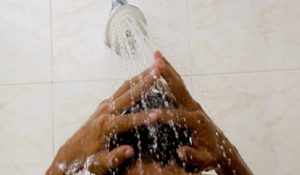 The time for the Friday ghusl is between dawn and the time of the Friday Prayer.

Abu Sa`id reported that the Prophet (peace be upon him) said: “Ghusl on Friday is obligatory (wajib) on every adult, as is using a toothbrush and applying some perfume.” (Al-Bukhari and Muslim)

The meaning of “obligatory” here is that it is greatly recommended. This understanding of the Prophet’s saying is derived from what Al-Bukhari recorded about an incident from Ibn `Umar about his father.

One day, `Umar ibn Al-Khattab was standing and delivering the khutbah when `Uthman, one of the people from among the emigrants and helpers, entered. `Umar said to him, “What time is it now?” He said, “I was busy and could not return home. When I heard the call to prayer, I did not make more than the regular ablution.” `Umar said, “And the ablution only, when you know that the Messenger of Allah ordered us to perform ghusl?”

Commenting on the incident, says Ash-Shaf`i, “`Uthman did not leave the prayer to perform ghusl, nor did `Umar order him to do so. This illustrates that the Companions knew that this order was one of choice. It also shows that it is preferred.”

Abu Hurairah reported the Prophet saying, “Whoever makes the ablution and perfects it and then goes to the Friday Prayer and listens attentively, will have forgiveness during (the period) between the Friday and the next (Friday), and an additional three days.” (Muslim)

Says al-Qurtubi, “This hadith shows that ghusl is preferred. The mention of ablution, the reward and acceptability points to the fact that ablution alone is sufficient.” Ibn Hajr states in At-Talkhis, “It is one of the strongest proofs that ghusl for the Friday prayer is not obligatory. The statement that it is preferred is built upon the fact that if one does not perform ghusl, it will not harm (his prayer).

But, if others are harmed by his perspiration or bad smell from his clothes and body, ghusl becomes obligatory, and not performing it detracts from the rewards of prayer. Some scholars say that the Friday ghusl is a duty even if its nonperformance causes no harm (to others).

Their basis for this opinion is the hadith related by Abu Hurairah in which the Prophet (peace be on him) said, “It is a duty upon every Muslim to perform ghusl once every seven days, by washing his head and body.”

Al-Bukhari and Muslim accept the hadith mentioned on the subject in their apparent meanings and refute the ones contrary to the last hadith (of Abu Hurairah).

The time for the Friday ghusl is between dawn and the time of the Friday Prayer. It is preferable to do it at the time of departure (to the mosque). If one loses his ablution after that, it is sufficient for him just to make a new ablution (he does not have to repeat the ghusl).

If You Lost Your Ghusl

Says Al-Athram, “I heard Ahmad being asked if a person performed ghusl, and then lost it, would the regular ablution be sufficient for him. He said, “Yes, and I have not heard anything about that preferable to the hadith of Ibn ‘Abzi,” Ahmad is referring to the hadith related by Ibn Abi Shaibah (with a sahih chain from `Abdurahman ibn ‘Abzi on the authority of his father, who was a Companion.)

He performed ghusl for the Friday Prayer and afterwards nullified his ablution. After that, he performed just the regular ablution and did not repeat his ghusl. The time for the ghusl ends with the time of the prayer. If one performs ghusl after the prayer, it would not be the ghusl of the Friday Prayer, and one who does so is not following the Prophet’s order.

Ibn `Umar reported that the Prophet said, “Before you come to the Friday Prayer, you should perform ghusl. (Related by “the group”)

Muslim says, “When one of you wants to come to the Friday Prayer, he should perform ghusl.” Ibn ‘Abdul-Barr related that there is a consensus on this point.