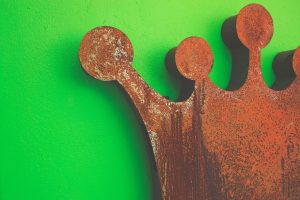 Shortly after the conversion of the two powerful heroes, Hamzah ibn `Abdel-Muttalib and `Umar ibn Al-Khattab (may Allah be pleased with them), the clouds of tyranny and oppression against Muslims in Makkah started to clear away and the Makkah polytheists realized that it was no use meting out torture to the Muslims. They consequently began to direct their campaign to a different course.

One day some of the important men of Makkah gathered in the enclosure of Al-Ka`bah, and `Utbah ibn Rabi`ah, a chief among them, offered to approach the Prophet (peace and blessings be upon him) and contract a bargain with him whereby they give him whatever worldly wealth he asks for, on condition that he keep silent and no longer proclaim his new faith. The people of Quraish endorsed his proposal and requested him to undertake that task.

So, `Utbah approached Prophet Muhammad (peace and blessings be upon him) with the following offer:

If you are doing all this with a view to getting wealth, we will join together to give you greater riches than any Quraishites has possessed.

If ambition moves you, we will make you our chief; we will never decide anything without referring to you.

If you desire kingship, we will readily offer you that.

If you are under the power of an evil spirit which seems to haunt and dominate you so that you cannot shake off its yoke, then we shall call in skillful physicians to cure you.

“Have you said all?” asked the Prophet (peace and blessings be upon him); and then hearing that all had been said, he spoke forth, reciting verses from Surat Fussilat:

In the Name of Allah, the Most Beneficent, the Most Merciful.

{Ha Meem. [This is] a revelation from Allah, the Most Beneficent, the Most Merciful.

A Book whereof the verses are explained in detail; — a Qur’an in Arabic for people who know.

Giving glad tidings and warning; but most of them turn away, so they listen not.

The Messenger of Allah (peace and blessings be upon him) went on reciting the Chapter while `Utbah sitting and listening attentively with his hand behind his back to support him. When the Messenger reached the verse that required prostration, he immediately prostrated himself. After that, he turned to `Utbah saying:

“Abu Al-Waleed! You have heard my reply, you are now free to do whatever you please.“

`Utbah then retired to his company to give them his feedback. When his compatriots saw him, they swore that he had returned to them with a countenance unlike the one he had before meeting the Prophet (peace and blessings be upon him).

He immediately communicated to them the details of the talk he gave and the reply he received, and commented saying:

I have never heard words similar to those ones he recited. They definitely relate neither to poetry nor to witchcraft nor do they derive from soothsaying. O people of Quraish! I request you to heed my advice: Let the man alone and grant him full freedom to pursue his goals. I swear that his words will have formidable consequences. Should the other Arabs rid you of him, they will then spare you the trouble. On the other hand, if he accedes to power over the Arabs, then you will share him his kingship and might.”

These words, of course, fell on deaf ears and did not appeal to the polytheists, who jeered at `Utbah and claimed that the Prophet (peace and blessings be upon him) had bewitched him. (Ibn Hisham 1/293,294)

In another version of the same event, it is related that `Utbah went on attentively listening to the Prophet (peace and blessings be upon him) until the latter began to recite Allah’s words:

{But if they turn away, then say (O Muhammad): “I have warned you of a thunderbolt like the thunderbolt that (overtook the peoples of) `Aad and Thamud} (Fussilat 41:13)

Panicked and stunned, ‘Utbah stood up putting his hand on the Prophet’s mouth and begged him in the Name of Allah and the kinship ties to stop lest the calamity should befall the people of Quraish. He then hurriedly returned to his compatriots and informed them of what he had heard. (Tafseer Ibn Kathir 6/159- 161)

Taken with slight editorial modifications from Ar-Rahiq Al-Makhtum (The Sealed Nectar) by Sheikh Safi-ur-Rahman al-Mubarkpuri who was born and received his education in India. He taught jurisprudence and Hadith in the Salafi University and worked as the editor in chief of its magazine Muhaddith. He worked in the Sunnah Center affiliated with the Islamic University in Madinah, Saudi Arabia. He authored a number of books, including Ar-Rahiq Al-Makhtum (The Sealed Nectar) which was honored by the World Muslim League with the first prize in a contest about the Prophet’s biography.