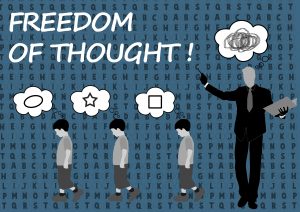 Belief and worship are only of any value when they are directed to God by the free will of the individual.

Islam and Freedom of Thought

Islam is a religion which provides and guarantees freedom of ideas, thought and life. It has issued commands to prevent and forbid tension, disputes, slander and even negative thinking among people.

In the same way that it is determinedly opposed to terrorism and all acts of violence, it has also forbidden even the slightest ideological pressure to be put on them:

“There is no compulsion in religion. True guidance has become clearly distinct from error.” (Al-Baqarah 2:256)

Forcing people to believe in a religion or to adopt its forms of belief is completely contrary to the essence and spirit of Islam. According to Islam, true faith is only possible with free will and freedom of conscience. Of course, Muslims can advise and encourage each other about the features of Qur’anic morality. All believers are charged with explaining Qur’anic morality to people in the nicest manner possible. They will explain the beauties of religion in the light of the verse, “Call to the way of your Lord with wisdom and fair admonition…” (Al-Nahl 16:125), however, they must also bear in mind the verse, “You are not responsible for their guidance, but God guides whoever He wills.” (Al-Baqarah 2:272)

They will never resort to compulsion, nor any kind of physical or psychological pressure. Neither will they use any worldly privilege to turn someone towards religion. When they receive a negative response to what they say, Muslims will reply along the lines of: “To you your religion, and to me, mine” (Al-Kafirun 109:6)

The world we live in contains societies with all kinds of beliefs: Christian, Jewish, Buddhist, Hindu, atheist, deist and even pagan. Muslims living in such a world must be tolerant of all beliefs they come up against, no matter what they may be, and behave forgivingly, justly and humanely. This responsibility placed on believers is to invite people to the beauty of the religion of God by means of peace and tolerance. The decision whether or not to implement these truths, whether or not to believe, lies with the other party. Forcing that person to believe, or trying to impose anything on him, is a violation of Qur’anic morality. In fact, God issues a reminder to believers in the Qur’an:

“If your Lord had willed, all the people on the earth would have believed. Do you think you can force people to be believers?” (Yunus 10:99)

“We know best what they say and you [O Muhammad] are not a compeller over them. But warn by the Qur’an whoever fears My warning.” (Qaaf 50:45)

A model of society in which people are forced to worship is completely contradictory to Islam. Belief and worship are only of any value when they are directed to God by the free will of the individual. If a system imposes belief and worship on people, then they will become religious out of fear of that system. From the religious point of view, what really counts is that religion should be lived for God’s good pleasure in an environment where peoples’ consciences are totally free.

The history of Islam is full of the tolerant practices of Muslim rulers who have respected all religions and built religious freedom with their own hands. For example, Thomas Arnold, a British missionary employed in the service of the Indian government, describes that Islam favors freedom in these words:

But of any organized attempt to force the acceptance of Islam on the non-Muslim population, or of any systematic persecution intended to stamp out the Christian religion, we hear nothing. Had the caliphs chosen to adopt either course of action, they might have swept away Christianity as easily as Ferdinand and Isabella drove Islam out of Spain, or Louis XIV made Protestantism penal in France, or the Jews were kept out of England for 350 years. The Eastern Churches in Asia were entirely cut off from communion with the rest of Christendom, throughout which no one would have been found to lift a finger on their behalf, as heretical communions. So that the very survival of these Churches to the present day is a strong proof of the generally tolerant attitude of the Muhammadan governments towards them.