Islam is submitting oneself to Allah through tawheed, submitting to Him through obedience and freeing oneself from shirk and its people. 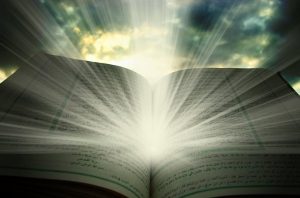 The Qur’an is the greatest book that Allah has given to whom He has chosen from amongst His creation.

And so Allah has divided this Ummah that He caused to inherit this Noble Book into three categories: one who wrongs himself, one who is moderate and one who is foremost in good deeds.

Those who “wrong themselves” are: Those who obey their Lord at times and disobey Him at other times, and mix good deeds with bad deeds. Allah started the verse by mentioning them first so that such people do not despair, to show Allah’s tremendous favor upon them and because they will make up most of the dwellers of Paradise. Those who are “moderate” are: Those who fulfill the obligatory acts and refrain from the unlawful acts.

Those who are “foremost in good deeds” are: Those who fulfill the obligatory acts, refrain from the unlawful acts, and draw near to Allah by doing everything he has been ordered to do of obligatory and supererogatory acts.

Allah left mentioning them in the verse till the end so that such people do not fall into self-admiration of their deeds thereby rendering them worthless, and because they will be the most deserving of entering Paradise that is mentioned right after them in the next verse.

(For them are) gardens of perpetual residence which they will enter. They will be adorned therein with bracelets of gold and pearls, and their garments therein will be silk. (Fatir 35:33)

There is no happiness for mankind in this world and the hereafter except with Islam. Their need for it is greater than their need for food, drink and oxygen. It is the greatest blessing of Allah upon His creation.

Every person is compelled to abide by an order. Thus, he is between two movements: One that brings for him that which benefits him and the other that wards off from him that which harms him. Islam is the light that makes clear what will bring him benefit and what will cause him harm, and gives its followers rewards that are multiplied.

The article is an excerpt from the author’s book “Summarized Islamic Fiqh In Light of the Qur’an and Sunnah”, translated by Kamil Ahmad & Jawad Beg