Indeed every human on earth is obligated to be one who submits to Allah, is obedient to Him, following what He enjoined and avoiding what He forbade irrespective of differences in time or place, however when people changed their religion and began to follow their whims and desires they departed from the truth and began to follow falsehood. 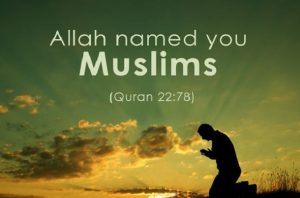 The religion of Allah that all Prophets came with was Islam.

So Allah the Exalted sent Messengers to take people by the hand and direct them to the path of guidance and truth and to return them to belief in the Oneness of Allah and his worship, as Allah has said:

And We sent not before you any messenger except that We revealed to him that, ‘There is no deity except Me, so worship Me’. (Al-Anbiyaa’ 21:25)

So whoever responded to their call deserved to be called “Muslim” which Allah the Exalted called all of His slaves when He said:

The Qur’an has also explained to us that the message of all Prophets was to invite to Islam and whoever followed them was from amongst the Muslims. In regards to the Prophet Noah (peace be upon him) the Qur’an states:

And I have been commanded to be among the Muslims. (Yunus 10:72)

And in regards to the Prophet Abraham and Ishmael (peace be upon them):

Our Lord! and make us Muslims and of Our offspring a Muslim nation for you. (Al-Baqarah 2:128)

And in regards to the Prophet Jacob’s (peace be upon him) advice to his children the Qur’an states:

Or were you witnesses when death approached Jacob, when he said to his sons, ‘What will you worship after me?’ They said: “We will worship your God and the God of your fathers, Abraham and Ishmael and Isaac – one God. And we are Muslims (in submission) to Him. (Al-Baqarah 2:133)

And in regards to the Prophet Moses (peace be upon him)

And Moses said: ‘O My people! If you have believed In Allah, Then put Your trust in Him if you are Muslims’ (those who submit to Allah’s Will). (Yunus 10:84)

And in regards to the Prophet Joseph (peace be upon him)

Cause me to die as a Muslim (the one submitting to Your will), and join me with the righteous. (Yusuf 12:101)

And in regards to the Prophet Solomon (peace be upon him) the Qur’an states:

Be not haughty against Me, but come to Me as Muslims (true believers who submit to Allah with full submission). (An-Naml 27:31)

And in regards to the Prophet Lot (peace be upon him):

And We found not within them other than a (single) house of Muslims. (Adh-Dhariyat 51:36)

And in regards to the disciples of Jesus (peace be upon him):

Verily, the Religion with Allah is Islam Then when Jesus came to know of their disbelief, He said: “Who will be my helpers In Allah’s Cause?” The disciples said: “We are the helpers of Allah; we believe In Allah, and bear witness that we are Muslims (i.e. we submit to Allah). (Aal `Imran 3:52)

So the invitation of the Prophets was an invitation to Islam because their Lord was one and their religion was one even if their sacred laws differed somewhat as we will explain in the upcoming chapters. The Prophet Mohammed (peace be upon him) said:

“The prophets are paternal brothers, their mothers are different but their religion is one.” (Al-Bukhari and Muslim)

Therefore the religion of Allah that all prophets came with was Islam. Allah says in the Qur’an:

And Allah will not accept any religion from his creation other than that of Islam as He said in the Qur’an:

And whoever seeks a Religion other than Islam, it will never be accepted of him, and In the Hereafter He will be one of the losers. (Aal `Imran 3:85)

The article is excerpted from the book “A Beneficial Summary of Rulings for New Muslim”, published by The Ministry of Endowments & Islamic Affairs, Kuwait- 2nd Edition 1436/2015.