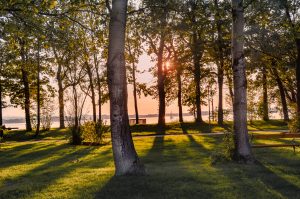 The Prophet’s saying “make zuhd from the dunya” [Ibn Majah] does not imply a disregard for this world, but rather an awareness of the transient nature of the worldly material things which are insignificant in relation to the permanence of what Allah promises … “All that is with you is bound to come to an end, whereas that which is with God is everlasting. And most certainly shall We grant unto those who are patient in adversity their reward in accordance with the best that they ever did” [An-Nahl 16:96].

Zuhd entails abandoning whatever of this world that does not bring about benefit in the Hereafter. Zuhd resides in the heart and is practiced by ridding the heart of enslavement from the unwarranted desire and the over-attentiveness to things that are temporary. It entails your being more certain in what Allah has in store for you than you are about what you have in your hand. As Prophet Muhammad (pbuh) said; “When Allah desires goodness for his servant, He grants the capacity of abstention from materialism, a desire for the Hereafter and an insight into his own faults”.

‘Isa/Jesus (pbuh) was the embodiment of the true zaahid. Ka’b al-Ahbar said; Jesus the son of Mary would walk bare-footed, claiming nothing in the way of shelter, finery, wares, garments, or money; of the latter, he would procure only enough to subsist for the day. Once the sun would set, he would align himself and pray until morning. He would restore sight to the blind, heal those afflicted with leprosy, and revive the dead – all with the license of God. He was ascetic in matters of this world, vigorously exuberant towards the hereafter, ever-vigilant in his devotions to God. He was an itinerant who wandered the earth…..It was then that God raised him up to the heavens.

The Messiah (pbuh) said: “Asceticism / Abstention from materialism revolves around three days; Yesterday, which has passed and from it, you should seek admonition / learn a lesson; Today, in which you should increase your preparation; Tomorrow of which you know not what it holds. [Musnad Ahmed]

The Messiah (pbuh) said: “O Children of Israel! I have been positioned on earth with a particular status, and there is neither pompousness nor arrogance. Do you know where my residence really is?” They said, “Where is your residence, O Spirit of Allah.” The Messiah replied, “My home is any place of worship, my perfume is water, hunger is the flavouring of my food, my feet are my transport, my lamp at the night is the moon, my blanket in the winter is (the rising of the sun) east of the earth, my food is basic, my fruit and flowers are whatever grows from the earth, my garment is wool, my motto is fear of Allah and I accompany the sick and the poor. I sleep while I have nothing and I wake up while I have nothing, and yet there is no one on earth wealthier than I.” [Bihaar al-Anwaar]

Taking a Collective Lesson from the Messiah (pbuh) Muslims and Christians do have differing perspectives on Jesus’ life and teachings, but his spiritual legacy, as a righteous and principled guide, his mission as a Prince of Peace offers an alternative opportunity for people of faith to recognize their shared religious heritage. Christians and Muslims would do well to reflect on the verse in the Quran reaffirming Allah’s eternal message of spiritual unity: “Say: ‘We believe in God and the revelation given to us and to Abraham, Ismail, Isaac, Jacob, and the Tribes, and message given to Moses and Jesus, and that given to (all) Prophets from their Lord. We make no distinction between any of them, and it is unto Him that we surrender ourselves.‘” [Al-Baqarah 2:136]