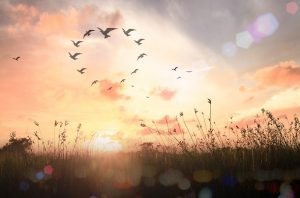 The love of God should conquer a man’s heart and possess it wholly.

Nevertheless, rightly to understand the love of God is so difficult a matter that one sect of theologians have altogether denied that man can love a Being who is not of his own species, and they have defined the love of God as consisting merely in obedience. Those who hold such views do not know what real religion is.

All Muslims are agreed that the love of God is a duty. God says concerning the believers, “He loves them and they love Him,” (Al-Ma’idah 5:54) and the Prophet said, “Till a man loves God and His Prophet more than anything else he has not the right faith.”

The following prayer was taught by the Prophet to his companions, “O God, grant me to love You and to love those who love You, and whatsoever brings me nearer to Your love, and make Your love more precious to me than cold water to the thirsty.” Hassan Basri used to say, “He who knows God loves Him, and he who knows the world hates it.”

We come now to treat of love in its essential nature. Love may be defined as an inclination to that which is pleasant. This is apparent in the case of the five senses, each of which may be said to love that which gives it delight; thus the eye loves beautiful forms, the ear music, etc. This is a kind of love we share with the animals. But there is a sixth sense, or faculty of perception, implanted in the heart, which animals do not possess, through which we become aware of spiritual beauty and excellence.

Thus, a man who is only acquainted with sensuous delights cannot understand what the Prophet meant when he said he loved prayer more than perfumes or women, though the last two were also pleasant to him. But he whose inner eye is opened to behold the beauty and perfection of God will despise all outward sights in comparison, however fair they may be.

The former kind of man will say that beauty resides in red-and-white complexions, well-proportioned limbs, and so forth, but he will be blind to moral beauty, such as men refer to when they speak of such and such a man as possessing a “beautiful” character. But those possessed of inner perception find it quite possible to love the departed great, such as the Caliphs `Umar and Abu Bakr, on account of their noble qualities, though their bodies have long been mingled with the dust.

Such love is directed not towards any outward form, but towards the inner character. Even when we wish to excite love in a child towards any one, we do not describe their outward beauty of form, etc., but their inner excellences.

Causes of Such Love

When we apply this principle to the love of God we shall find that He alone is worthy of our love, and that, if any one loves Him not, it is because he does not know Him. Whatever we love in any one we love because it is a reflection of Him. It is for this reason that we love Muhammad (peace be upon him) because he is the Prophet and the Beloved of God, and the love of learned and pious men is really the love of God. We shall see this more clearly if we consider what are the causes which excite love.

The first cause is this, that man loves himself and the perfection of his own nature. This leads him directly to the love of God, for man’s very existence and man’s attributes are nothing else but the gift of God, but for whose grace and kindness man would never have emerged from behind the curtain of non-existence into the visible world.

Man’s preservation and eventual attainment to perfection are also, entirely dependent upon the grace of God. It would indeed be a wonder, if one should take refuge from the heat of the sun under the shadow of a tree and not be grateful to the tree, without which there would be no shadow at all. Precisely in the same way, were it not for God, man would have no existence nor attributes at all; wherefore, then, should he not love God, unless he be ignorant of Him? Doubtless fools cannot love Him, for the lover of Him springs directly from the knowledge of Him, and whence should a fool have knowledge?

The second cause of this love is that man loves his benefactor, and in truth his only Benefactor is God, for whatever kindness he receives from any fellow-creature is due to the immediate instigation of God. Whatever motive may have prompted the kindness he receives from another, whether the desire to gain religious merit or a good name, God is the Agent who set that motive to work.

The third cause is the love that is aroused by contemplation of the attributes of God, His power and wisdom, of which human power and wisdom are but the feeblest reflections. This love is akin to that we feel to the great and good men of the past, such as the Imam Malik and the Imam Shafi`i, though we never expect to receive any personal benefits from them, and, is therefore a more disinterested kind of love.

God said to the Prophet David, “That servant is dearest to Me who does not seek Me from fear of punishment or hope of reward, but to pay the debt due to My Deity.” And in the Psalms it is written, “Who is a greater transgressor than he who worships Me from fear of hell or hope of heaven? If I had created neither, should I not then have deserved to be worshiped?”

The fourth cause of this love is the affinity between man and God, which is referred to in the saying of the Prophet, “Verily God created man in His own likeness.” Furthermore, God has said, “My servant seeks proximity to Me, that I may make him My friend, and when I have made him My friend I become his ear, his eye, his tongue.” Again, God said to Moses, “I was sick, and you didn’t not visit Me?” Moses replied, “O God! You are Lord of heaven and earth: how could You be sick?”

God said, “A certain servant of Mine was sick; had you visited, him, you would have visited Me.”

This is a somewhat dangerous topic to dwell upon, as it is beyond the understanding of common people, and even intelligent men have stumbled in treating of it, and come to believe in incarnation and union with God.

Still, the affinity which does exist between man and God disposes of the objection of those theologians mentioned above, who maintain that man cannot love a Being who is not of his own species.

However great the distance between them, man can love God because of the affinity indicated in the saying, “God created man in His own likeness.” (Genesis 1:27)

The article is excerpted from The Alchemy of Happiness by Al-Ghazzali, translated from the Hindustani by Claud Field (1909). This edition was created and published by Global Grey ©GlobalGrey 2017.