Someone who has dealt with the mentally ill knows people can be identified by their symptoms.  Muhammad displayed no symptom of insanity at any time in his life  No friend, wife, or family member suspected or abandoned him due to insanity.  As for the effects of revelations on the Prophet, such as perspiration and the likes, it was due to the intensity of the Message which he had to bear and not due to any epileptic fit or instance of insanity…

Quite to the contrary, Muhammad preached for a long time and brought a Law unknown in its completeness and sophistication to ancient Arabs.  If the prophet was insane, it would have been obvious to those around him at one point in a period of twenty-three years.  When in history did an insane man preach his message to worship One God for ten years, three of which he and his followers spent in exile, and eventually became the ruler of his lands?  Which insane man has ever won the hearts and minds of people who met him and earned the respect of his adversaries?

More so, his closest companions, Abu Bakr and Umar were recognized for their abilities, nobility, skills, and finesse.  They were willing to sacrifice anything for the religion he brought.  On one occasion, Abu Bakr, brought all his material possessions to Muhammad, may the mercy and blessings of God be upon him, and when asked what he left for his family, responded, ‘I left for them God and His Messenger!’

Abu Bakr, a merchant by profession, after being elected the ruler of all of Arabs after Muhammad, spent a mere two dirham on himself and his family!

Umar became the ruler of Arabia after Abu Bakr and conquered Syria, Egypt, and subdued the Persian and Roman Empires.  He was a man known for his scrupulous justice.  How can someone suggest these people were following a mentally deranged individual?

God suggests: stand before God without bias or pre-conceived beliefs, and discuss it with another person or think about it yourself, this prophet has no madness, he is as stable today as you had known him for forty years.

“Say: ‘I counsel you one thing only: Be (ever­ conscious of) standing before God, whether you are in the company of others or alone; and then bethink yourselves (that) there is no madness in (this prophet,) your fellow-man: he is only a warner to you of suffering severe to come.’” (Saba’ 34:46)

The Meccans of old rejected his call out of tribal partisanship, and they were not truthful in their accusations of his insanity. Even today, many people refuse to accept Muhammad as a prophet simply because he was an Arab and self-gratify themselves by saying he must have been insane or worked for the devil.  Their hatred for Arabs translates into their rejection of Muhammad, even though God says:

“Nay, but he (whom you call a mad poet) has brought the truth; and he confirms the truth of (what the earlier of God’s) message-bearers (have taught).” (As-Saffat 37:37)

Although the pagan Arabs knew Muhammad all too well, but they still through accusations of insanity at him, for they considered his religion a sacrilege against the tradition of their forefathers.

“And when our verses are recited to them as clear evidences, they say, ‘This is not but a man who wishes to avert you from that which your fathers were worshipping.’  And they say, ‘This is not except a lie invented.’  And those who disbelieve say of the truth when it has come to them, ‘This is not but obvious magic.’  And We had not given them any scriptures which they could study, and We had not sent to them before you, (O Muhammad), any warner.  And those before them denied, and they (the people of Mecca) have not attained a tenth of what We had given them.  But they (i.e., the former peoples) denied My messengers, so how (terrible) was My reproach.” (Saba’ 34:43-45)

Was He A Poet?

God mentions their accusation in the Quran and responds to it: 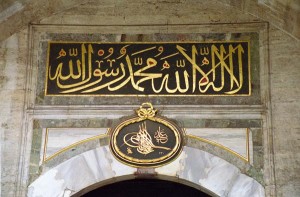 God describes the poets of that time so the Prophet can be compared with them:

“And as for the poets – (they, too, are prone to deceive themselves: and so, only) those who are lost in grievous error would follow them.  Art thou not aware that they roam confusedly through all the valleys (of words and thoughts)[1], and that they (so often) say what they do not do (or feel)?  (Most of them are of this kind -) save those who have attained to faith, and do righteous deeds, and remember God unceasingly, and defend them­selves (only) after having been wronged, and (trust in God’s promise that) those who are bent on wrong­doing will in time come to know how evil a turn their destinies are bound to take!” (Ash-Shu`ara’ 26:224-227)

Arabian poets were the furthest from the truth, speaking of wine, womanizing, war, and leisure, unlike the Prophet who invites to good manners, serving God, and helping the poor. Muhammad followed his own teachings before anyone else unlike the poets of old or philosophers of today.

The Quran which the Prophet recited was unlike any poetry in its style.  The Arabs of the time have strict rules in regards to rhythm, rhyme, syllables and endings to each verse of poetry.  The Quran did not conform to any of the rules which were known in the time, but at the same time, it surpasses any type of text which the Arabs had ever heard.  Some of them actually became Muslims after hearing only a few verses of the Quran, due to their certain knowledge that the source of something so beautiful as it could not be any created being.

Muhammad was never known to have composed a poem before Islam or after prophethood.  Rather, the Prophet had a sever dislike for it.  Compilations of his statements, called Sunna, have been diligently preserved and are completely different in its literary content than the Quran.  The store-house of Arabic poetry do not contain any couplets by Muhammad.

Was He A Sorcerer?

Prophet Muhammad never learned or practiced sorcery.  On the contrary, he condemned the practice of sorcery and taught his followers how to seek protection against it.

Sorcerers have a strong relationship with the devil.  Their partnership allows them to deceive people.  Devils propagate lies, sins, obscenities, immorality, evil, and they destroy familys.  The Quran clarifies those upon whom the devils descend:

“Shall I inform you upon whom the devils descend?  They descend upon every sinful liar.  They pass on what is heard, and most of them are liars.” (Ash-Shu`ara’ 26:221-223)

Prophet Muhammad was known and recognized to be a man of integrity true to his word who was not known to have ever lied.  He commanded good morals and fine manners.  No sorcerer in world history has brought a scripture like the Quran or a Law like his.

[1] The idiomatic phrase is used, as most of the commentators point out, to describe a confused or aimless – and often self-contradictory – play with words and thoughts. In this context, it is meant to stress the difference between the precision of the Quran, which is free from all inner contradictions, and the vagueness often inherent in poetry.

Adapted with editorial adjustments from www.islamreligion.com.