Remember Me; I will remember you. Be grateful to Me and do not deny Me. O Believers! Seek help with patience and Prayer. For Allah is with the patient ones. (Al-Baqarah 2:152-153)

Prayer (Salah) being one of the five pillars of Islam is mentioned many times in the Qur’an as an obligatory duty for every adult Muslim. It is to be offered five times a day and certain prerequisites are to be met before offering it. 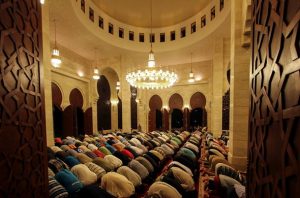 monotheism permeates both the concept and form of prayer in Islam, as it is devoted wholly to Allah.

In the above Qur’anic passage, however, the focus is on the essence or underlying spirit of prayer, which helps one grasp this basic duty and pivotal concept in Islam.

Needless to add, prayer in some form features in every religious tradition. Some of its popular forms are: incantations, spells and devotional acts and rituals. It varies from being silent to vocal, often assuming the form of meditation.

In Christianity, it is prayer to God the Trinity; to the Father, through the Son, by the Holy Spirit. It may include elements of adoration, confession, intercession, petition or thanksgiving, following the pattern of the so-called “Lord’s Prayer” which Jesus taught his disciples (Matthew 6:9-15, Luke 11:2-4) and other biblical examples of prayer, especially those found in the New Testament epistles and the Old Testament psalms. Use is also made of the prayers of saints and spiritual writers. Posture in prayer varies. Some traditions teach kneeling, some standing, some sitting. Forms and types of prayer also vary.

By comparison, monotheism permeates both the concept and form of prayer in Islam, as it is devoted wholly to Allah, the One True God.

Like any other Muslim, the Prophet Muhammad (peace be upon him) performed the same prayer, bowing and prostrating to Allah.

Furthermore, unlike other faiths which recommend private or public forms of prayer, which usually turn into exercises in inner contemplation or meditation, Islam prescribes prayer as an obligatory duty, to be performed in congregation in a mosque, a particular structure set apart for this specific purpose. It is to be offered at appointed hours and in a particular manner, of which details are to be found in the Qur’an and Hadith, and as exemplified by the Prophet Muhammad (peace be upon him).

His Companions faithfully followed the way he said prayers and the same has been the practice of billions of Muslims down the ages. Remarkably, its form and features have remained unaltered all along.  Every Muslim performs it alike at the same hours, regardless of the place of his residence and in the same direction of Makkah.

Both literally and symbolically prayer has been the most distinct bond of Muslim fraternity in all time and place.

Certain prerequisites must be fulfilled before offering prayer. For example, the washing of some body parts is a precondition for prayer:

O you who believe! When ye rise up for prayer, wash you faces, and your hands up to the elbows, and lightly rub your heads and (wash) your feet up to the ankles. And if ye are unclean, purify yourselves. And if you are sick or on a journey, or one of you cometh from the closet, or you have had contact with women, and you find not water, then go to clean, high ground and rub your faces and your hands with some of it. Allah would not place a burden on you, but He would purify you and would perfect His grace upon you, that you may give thanks. (Al-Ma’idah 5:6)

If one is in a state of impurity, one should take a bath,

O you who believe! Draw not near unto prayer when you are drunken, till you know that which you utter, nor when you are polluted, save when journeying upon the road, till you have bathed. And if you be ill, or on a journey, or one of you cometh from the closet, or you have touched women, and you find not water, then go to high clean soil and rub your faces and your hands (therewith). Lo! Allah is Benign, Forgiving. (An-Nisaa’ 4:43)

Likewise, one should put on clean clothes when offering prayer, O Children of Adam! Look to your adornment at every place of worship, and eat and drink, but be not prodigal. Lo! He loveth not the prodigals. (Al-A`raf 7:31) One should also face the direction of prayer, “And from wherever you go out (for prayer), turn your face toward Al-Masjid Al-Haram”. (Al-Baqarah 2:150)

Some other conditions governing prayer are that Allah’s excellent names and attributes be mentioned and a portion of the Qur’an be recited in prayer.

An extensive account of these and other norms to be observed during prayer feature in standard works on Muslim theology and jurisprudence.

The passage we are concerned with here examines only the spirit of prayer defining what it is, its components and its benefits for man. For its better appreciation this passage should be read together with the following Qur’anic extracts which bring into further relief the objectives and essence of prayer:

Successful are the Believers, those who humble themselves in Prayer. (Al-Mu’minun 23:1-2)

And seek (Allah’s) help in patience and Prayer. Surely it is hard, except for those who fear Allah. (Al-Baqarah 2:45)

Those who pray, they are constant in their Prayer, and in whose wealth there is a portion for the beggar and the poor. They testify to the Day of Judgment and are fearful of their Lord’s punishment. (Al-Ma`arij 70:23-27)

Woe be to such performers of Prayer, who are negligent of their Prayer, who aim to be seen and who withhold even common items from others. (Al-Ma`un 107:4-7)

The ayah cited at the outset opens with the exhortation that man should remember Allah.

Since He is man’s Creator, Sustainer and Benefactor par excellence, it is perfectly in order that man’s mind and heart be filled with the thought of His majesty, glory and numerous favors.

The article is an excerpt from Abdur Raheem Kidwai’s book “The Qur’an: Essential Teachings”, published by the Islamic Foundation, 2005/1426 H.