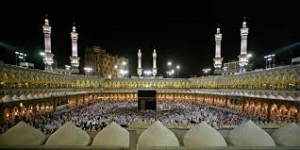 Whether a slight or great deviation, the key issue seems to be the actual effort and level of sincerity displayed in trying to figure out the right direction of the Qiblah.

For millions of Muslims around the world, traveling is part of their routine. Whether for studies, business or pleasure, the need to embark on long-distance journeys arises continuously and with this comes the challenge of determining the correct direction of the Qiblah while on such trips.

The importance of identifying the Qiblah (direction towards the Ka`bah in Makkah) lies in the obligation of performing the five daily Prayers in the life of a Muslim. Making a sincere attempt to face the Qiblah is one of the conditions for the validity of Prayer.

When a mosque is accessible in their respective home countries many Muslims hardly bother about this since the Qiblah is already identified inside their mosques. However, when one is traveling and cannot find a mosque (or is unfortunate enough to land in a mosque where the Qiblah is not correctly positioned,) knowing how to find the Qiblah becomes a handy skill.

Precise observation, as well as an uncanny ability to derive new solutions to ancient problems, was perhaps what made Muslim scientists outstanding in the Middle Ages. It, therefore, did not come as a surprise when they embarked on the arduous journey of mathematically determining the Qiblah.

The puzzle was to devise a means of finding the direction of the Ka`bah in Makkah at all times. By employing advanced trigonometry, they eventually came up with medieval Qiblah tables, which had a high degree of accuracy.

However, the sophistication of these tables, which even European geographers at that time couldn’t fully comprehend, limited their use (Lunde). Another popular instrument that was used for determining the Qiblah then became the Astrolabe.

Initially designed mainly for astrology, navigation, and surveying, astronomers from the Islamic world soon found another use for it. By adding special tables to the existing ones at the back of the conventional astrolabe, it had the added functionality of finding the direction to Makkah, and consequently the Qiblah. (Winterburn)

With the rapid spread of Islam came the demand for more accurate, easier-to-use instruments with which the direction of the Qiblah could be determined almost effortlessly. It was necessary to cater to the needs of the growing Muslim population that had spread far beyond the Arabian Peninsula thereby making the determination of the Qiblah with the available instruments a more challenging task.

In the 13th century AD, the introduction of the compass to the Islamic world revolutionalized the entire Qiblah finding process (Winterburn). By incorporating it into the astrolabe, it was possible to find Makkah from anywhere around the Islamic world. Further advancements saw the compass being used alongside other Qiblah indicators such as the Sundial and the Persian Qiblah indicator, all of which were quite famous during the 18th century.

In the late 20th century compass-based tools were made to help Muslims quickly find the Qiblah. A compass specially marked and coded for major cities around the world and with the Ka`bah drawn inside its dial became popular at one point. A similar compass stuck to a portable prayer mat also became commonly sold around the world. But in this present century, things couldn’t have gotten better for the Muslim Ummah.

With the proliferation of smartphones and other digital gadgets, the usual problems faced while trying to find the Qiblah are fast fading away. Be it a wristwatch, mobile phone or hand-held GPS device, the most important thing is to ensure they are equipped with either a compass or a relevant map to be able to perform the needed function of finding the Qiblah in real-time.

The latest trend has become the use of Location Based Services (LBS). LBS involve software solutions configured to work with a handheld mobile device, which in turn operates on a specific wireless network. When used in conjunction with a Geographical Information System (GIS) server application, it readily provides the device owner with vital information such as the routes to, and location of, Makkah relative to their own present location or position. (GIM International)

The combination of GIS and GPS technologies has analytical capabilities that make it possible to determine the individual location of each mobile phone user. Thereafter, required information such as the location of the Qiblah and other places of interest is presented to the user via a map interface. For devices that do not support a graphical map interface, the requested information comes in the form of textual or audio instructions.

Quite similar to the contentious issue of moon sighting especially prior to the commencement of the holy month of Ramadan, “Qiblah finding” is one topic that sometimes causes tempers to flare when being discussed.

While some people believe the center of the face has to be perfectly aligned with the center of the Ka`bah for the prayer to be valid, others believe this position is too rigid and need not be adopted. The prophet Muhammad, blessings and peace be upon him, is reported to have said: “Whatever is between the east and the west is the Qiblah.” (Narrated by At-Tirmidhi, 342; Ibn Maajah, 1011)

Though short, the profound meaning derivable from this hadith forms the basis of many Islamic verdicts (fatwas) on the issue of the Qiblah. As a result, the majority of scholars, including two of the four great Imams, Ahmad ibn Hanbal and Abu Hanifah, are of the opinion that the one who is close to the Ka`bah is required to face it head on, while the one who is far away from it must seek the general direction of the Ka`bah, without having to face it precisely. (Al-Munajid)

Hence, a slight deviation in the Qiblah is generally regarded as something permissible as long as the worshipper has done his utmost in trying to get it right, and perfection sure lies with Allah alone. There might not be much cause for worry if the deviation from the Qiblah is slight, but what happens if the deviation was great or totally off while praying?

According to a verdict issued by the highest religious decision-making body in the Kingdom of Saudi Arabia, “If a worshipper does his best to identify the direction of the Qiblah and prays, then he discovers that he was mistaken, his prayer is still valid.” (Fataawa Al-Lajnah Al-Daa’imah-6/314)

Whether a slight or great deviation, the key issue seems to be the actual effort and level of sincerity displayed in trying to figure out the right direction of the Qiblah. Therefore, the quarrels that sometimes arise when trying to establish the right position of the Qiblah at a certain location might just be uncalled for.

As Muslims, we are of the firm conviction that whatever Allah commands us to do is ultimately for our benefit, and this includes facing the Ka`bah in Prayer. The same way we strive day and night, spending lots of money to acquire quality education, posh cars, and houses, we need to channel the similar amount of resources, energy, zeal, and passion towards our religion.

By so doing, we are likely to always get the direction of the Qiblah right irrespective of which part of the globe we find ourselves; and if not, our Lord is most merciful, oft-forgiving.

Abdul-Lateef Balogun has a BSc in Surveying & Geoinformatics from the University of Lagos, Nigeria. He is studying his Master degree at the Department of Geoinformatics, University of Technology, Malaysia.  He can be reached by sending an e-mail to sciencetech@iolteam.com.