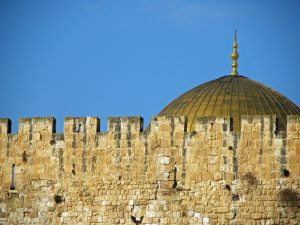 Rajab is the seventh month of Islamic Lunar Calendar. This month is a prelude to Ramadan, the ninth month in the Islamic calendar in which Muslims are commanded to observe fasting from sunrise to sunset. It is also one of the four sacred months besides, Muharram (Islamic month 1), Dhū al-Qa`dah (Islamic month 11), and Dhu al-Hijjah (Islamic month 12). During these four months, hostilities and conflicts have been forbidden and have to come to an end or halt. Additionally, it is also the month remembered for one of the most sacred events to take place in the history of Islam when a human being was chosen by the Creator of the universe to visit the world reserved for the life hereafter.

The event known as Al Isra’ wal Mi`raj which took place on the 27th day of Rajab with its mysterious dimensions still incomprehensible to the human mind. Israa’ is an Arabic word referring to Prophet Muhammad’s miraculous night journey from Makkah to Jerusalem – specifically, to the site of al-Aqsa Mosque in Jerusalem – as referred to in Surah Al-Israa’ in the Qur’an.

It is believed to have been followed by the Mi`raj, his ascension to heaven. According to some of the Hadith scholars this journey is believed to have taken place just over a year before Prophet Muhammad migrated to from Makkah to Madinah, on the 27th of Rajab.

Muslim scholars have often focused on recommended acts of worship during this month. However, some of these recommendations are the subject of debate and scrutiny. The spectrum of opinion range from attaching no specific value to any special act of worship in this month to sanctifying events and particular acts of worship. For instance, some scholars have presented some ahadith (sayings of the Prophet) recommending fasting at least once in the month of Rajab, while the others have rejected those ahadith declaring them weak. Unfortunately, few scholars have presented the significance of the month for a plural society beyond its relevance for Muslims. This has shifted the focus from the real significance of the month.

In essence, the month of Rajab and the events occurred therein highlight three important features.

Rajab is declared a sacred month, hence all hostilities must come to an end in this month. Although divine guidance has always encouraged humanity to refrain from executing their anger into unfavourable actions, there is a special emphasis made during the four sacred months as it provides a month-long reminder. The focus helps them to recognize and control their egos and desire and to refrain from hateful acts of taking revenge especially if it inflicts harm on others. The idea is simple that for four months in a year, a universal understanding in the sense of an ethical framework that people agree to self-restraint and work towards peace in a committed and dedicated manner. People are encouraged not to indulge in anything that can lead to conflicts either at home or in the world at large. This type of thinking would be enough to enable people to live peace throughout the year ensuring that the message of the sanctity of human life is preserved.

From an Islamic perspective, the experience of Isra and Miraj, journey to Jerusalem and then ascension to heavens in one night is a significant event in the history of humanity. For the first time, a messenger was invited to heavens to experience the worlds that are yet to emerge and then report it back to the believers. Whether it was physical or spiritual, is beside the point. What is significant is that a human reached a peak of incomparable proportions that is still beyond human comprehension. Obviously, it is implied that only truly a blessed human being with minimal flaws was allowed to have this experience. The event connects humanity with the hereafter and gives assurance to the believers that it is within the reach of every human being.

Prophet Muhammad in his ascension to heavens was first taken to Jerusalem. Why was this a one-stop flight? Why was it not direct? This is a very significant issue as it emphasizes the unity of all monotheistic religions and underscores the commitment of all religious communities to respect each other. There was no Muslim place of worship in Jerusalem at that time. There were symbols of Jewish and Christian faiths. There were Sabians also present. The presence of the Prophet in the holy lands establishes the principle of religious pluralism and unity of monotheistic faiths. Rather than engaging in conflicts, these faiths should work hand in hand to ensure that people develop a better understanding of their relations with the divine.

These were the essential messages that the month of Rajab highlights. Some of the recommended acts of worship include an emphasis on worship which are generally accepted to increase a person’s spirituality. For example:

These acts of worship prepare one to welcome the month of Ramadan.