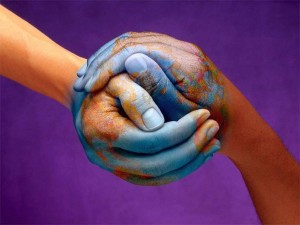 The ultimate goal of Islam is to establish peace and to bring about happiness for all beings in both this world and the eternal one in the hereafter.

Relations Between Muslims and Non-Muslims

Islam has not left any aspect of life without its required guidelines. For each aspect, it sets a basic rule, which is in harmony with the basic rules of the other aspects, to indicate in the end, that there is only one Creator and one perfect Legislator.

The basic rule usually functions as an axis around which the secondary rules and exceptions revolve. The relationship between Muslims and non-Muslims is no exception.

The basic rule for relations between Muslims and non-Muslims is based on a few verses. The first can be translated as,

This verse clearly assures that Islam is a mercy for all accountable beings, both humans and the Jinn. Islam is a mercy because it guides Muslims to felicity and happiness in both this world and in the hereafter. But is Islam a mercy for only those who choose it as their faith or should Muslims force people to accept it? Here, the second verse comes to assure that

“There is no compulsion in religion. The truth stands out clear from error.” (Al-Baqarah 2:256)

Other verses that make up the basic rule specifically define the kind of relationship that should take place between Muslims and non-Muslims. The Qur’an says as follows:

“Allah does not forbid you respecting those who have not made war against you on account of (your) religion, and have not driven you forth from your homes, that you show them kindness and deal with them justly; surely Allah loves the doers of justice. Allah only forbids you respecting those who made war upon you on account of (your) religion, and drove you forth from your homes and backed up (others) in your expulsion, that you make friends (and ally) with them, and whoever makes friends with them, these are wrong-doers.” (Al-Mumtahanah 60:8-9)

The above verses clearly assures that Muslims should not force others to accept Islam. In addition, Allah Almighty does not forbid Muslims from dealing justly with those who do not fight Islam or oppress Muslims. Indeed, He enjoins Muslims to do favors for them. Obviously, doing favors is more than just dealing justly, because it gives people more than what they deserve.

The above verses affirm that it is only forbidden to have relations with those who show hostility to Muslims. In this context, those who aid the oppressors are not better than the oppressors themselves.

“If they get the better of you, they would treat you as their enemies and stretch forth, their hands and tongues against you with evil, and they desire that you become unbelievers.” (Al-Mumtahanah 60:2)

Verse seven of the same chapter serves as an introduction for verses eight and nine, confirming that the above enmity does not always last forever. Allah says what means,

“It may be that Allah creates (mutual) love between you and the ones of them whom you took as enemies.” (Al-Mumtahanah 60:7)

The verse does not stipulate an enemy’s conversion as the reason for removing the enmity; actually, enmity may be ended if an enemy takes a supportive or at least a neutral position.

“O you people We have created you from a male and a female and made you into nations and tribes that you may know each other. The best among you is the most pious.” (Al-Hujurat 49:13)

Islam did not come to break the ties between human beings, to spread hatred and enmity, or to encourage bloodshed. Nor did it come to eliminate the freedom of choice in this life, which is secured by God. Indeed, even Satan was granted the freedom to choose between obeying and disobeying his Lord, he misused this gift and chose to disobey.

The above basic rule is based on the fact that Allah has distinguished humankind and the Jinn with special gifts that made them accountable for their choices in this life, for which they will be rewarded or punished mainly in the hereafter. Among these special gifts are intellectual faculties, divine guidance, and a limited freedom of choice.

A thorough review of the expeditions and battles during the lifetime of Prophet Muhammad (peace and blessings be upon him) shows that the Prophet never once initiated hostility. Rather, he only became involved in battles in self-defense and retaliation. In general, the causes of these battles could be classified under the following categories:

So, the basic rule in the relationship between Muslims and non-Muslims is that there must be coexistence and peace. This situation must be maintained, even if non-Muslims continue to reject Islam for themselves, as long as they do not react in a hostile way.