Allah Has Created people to be different in their living; some are rich and some poor, some well-off, affluent and high-esteemed, and others indigent, miserable and astray in life. That is great wisdom decreed by Allah so that people would exchange work, cooperate with one another, and use one another to achieve their requirements and needs: the rich person spends his money, and the poor person exerts his effort in labor for remuneration. In confirmation of that, Allah Almighty Says (what means):

“Do they distribute the Mercy of your Lord? It is We Who Have Apportioned among them their livelihood in the life of this world and Have Raised some of them above others in degrees [of rank] that they may make use of one another for service. But the Mercy of your Lord is better than whatever they accumulate.” (Quran 43:32)

Hajj as a shift against Racism: 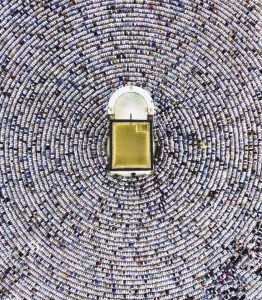 Indeed, the most noble of you in the Sight of Allah is the most righteous of you.

Had the difference been limited to the exchange of benefits, it would have been good. But some rich people exalt themselves above the poor, and their arrogance produces hatred among the poor. On the other hand, some poor people envy the rich, with the result that the rich boycott and neglect them; arrogance among some rich people versus hatred among some poor people, and haughtiness among some dignitaries versus envy among some of the common people. In this way, the social classes of the same nation have mutual aversion to each other, cooperation disappears, bonds are undone, and production decreases.

A Remedy of Racism

The remedy of that disease lies in the religious acts of worship in general, and Hajj in particular, which has a practical healing and effective decisive medicine to put an end to haughtiness, and lay the foundation for equality between all people in the form of (putting on the same clothing of) Ihram, performing Tawaaf, Sa‘y, and so on. In Hajj, no one could be distinguished from others with a particular uniform, clothing, appearance or adornment, because all of them are equal in their simple united appearance. That is indeed equality between individuals as well as between races and peoples, in compliance with what Allah Says (which means):

“O mankind, indeed We Have Created you from male and female and Made you peoples and tribes that you may know one another. Indeed, the most noble of you in the Sight of Allah is the most righteous of you.” (Quran 49:13)

Our Messenger, sallAllahu ‘alayhi wa sallam, said: “No Arab is superior to a non-Arab, nor a white-complexioned to a black-complexioned except by virtue of piety.”

Is Hajj then, from this point of view, worthy of the care of reformers, the concern of the sincere and the effort of the passionate?

We are all subject to our habits and governed by our traditions as a result of the house in which we live, the school in which we learn, and the environment surrounding us. A lot of our customs and habits are bad and harmful, the majority of our traditions are invalid and superstitious, and the greater part of what we agree upon is false and ignorant. Worship, as they said, is a second disposition, and to be released from traditions is very difficult upon a lot of people.

When a reformer likes to straighten the crookedness of his nation, and push it towards the pathways of perfection, he encounters the rocks of habits and traditions. He may perish and die before changing his people from a familiar habit, given that “people are slaves of their traditions”.

Hajj comes to release the individual from his habitual customs, and change his familiar traditions. Hajj, in this way, enables the pilgrim to govern himself, control his deeds, give up bad customs, and come away from awful traditions to the immense field of piety, virtues and spiritual elevation. That is because the pilgrim becomes a sovereign over his own self after having been a slave of his habits.
In confirmation of that, Allah Almighty Says (what means):

“Hajj is [during] well-known months, so whoever has made Hajj obligatory upon himself therein [by entering the state of Ihram], there is [to be for him] no sexual relations and no disobedience and no disputing during Hajj. And whatever good you do – Allah Knows it.” (Quran 2:197)

The Messenger of Allah, sallAllahu ‘alayhi wa sallam, stated that Hajj brings the Muslim out of his sins, misdeeds, bad customs and habits, saying:

“Whoever performs Hajj during which he does not have sexual intercourse (with his wife) nor commit wickedness, will become (as sinless) as he was on the very day his mother gave birth to him.”

Is Hajj, in this sense, not worthy of the care of educationalists and psychologists?

What is worthier of care than a worship-based practical system that releases man from the slavery of loss, and joins him to (Allah) The Most Merciful with a strong bond of truthfulness, certainty and faith?

Countries allocate money to physical sports and military exercises, a system for which our youth in schools are preparing. Without doubt, sport is a source of strength, valor, courage and gallantry, and an important support pillar in the construction of the glory of the Ummah. Islam was a forerunner in recognizing the virtue of sport, when it commanded people to learn racing, archery, horsemanship, swimming and swordfight to prepare for Jihaad in the way of security, truth and peace. It joined sport with acts of worship, so that the emotion and feeling would share with the heart in performing it. Thus, sport becomes a physical power and a spiritual worship which has its glorious benefits in this world, and its great reward in the Hereafter.