Superficiality: A Common Culture of Ignorance 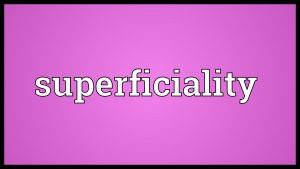 This is a weak culture that one can easily get free of, with a genuine intention

Those who rightly understand the greatness of Allah will behave with moral rectitude in everything they do. But superficiality distances a person completely from the sort of life that accords with the Qur’an.

The Prophet (Peace and blessings be upon him) says, “Wherever indecency and vile language enters becomes indecent” (Tirmidhi Hadiths).

These words warn us that baseness and chaos rule the life of anyone in such an unaware spiritual state. The place where he lives devolves into an unhappy environment open to tension and confusion and where issues can in no way be resolved. But here, an important characteristic of superficiality comes to light: It is not wholly one-sided.

Individuals who must endure the base culture of superficial people are also a part of their same unaware mindset. Members of the Religions of Superficiality immediately recognize one another and urge one another to distance themselves from the moral teachings of the Qur’an. In effect, they practically call one another to the Fire. Allah reveals this danger in the Qur’an:

“. . . Such people call you to the Fire whereas Allah calls you, with His permission, to the Garden and forgiveness. He makes His signs clear to people so that hopefully they will pay heed.” (Al-Baqarah: 221)

In other verses, Allah reveals how people can lead one another astray:

“Say: “Can any of your partner-deities guide to the truth?” Say: “Allah guides to the truth. Who has more right to be followed—He Who guides to the truth, or he who cannot guide unless he is guided? What is the matter with you? How do you reach your judgment?” Most of them follow nothing but conjecture. Conjecture is of no use whatsoever against the truth. Allah most certainly knows what they are doing.” (Yunus: 35-36)

“If you obeyed most of those on Earth, they would misguide you from Allah’s way. They follow nothing but conjecture. They are only guessing.” (Al-An`am: 116)

As in most other ways, those with weak faith and sick hearts exert a negative influence on others to live by superficiality. However, it must be emphasized that these people are in fact conscious of the superficiality they live out. They very well differentiate those with whom they could never share such a debased culture. They know that by means of this debased culture, it is impossible to form a relationship with genuine Muslims.

For this reason, when they come into contact with Muslims, they try their utmost to conceal their own trivial tendencies. They do not only try to hide themselves from Muslims, but also from others who seem superficial to a lesser extent. For example, such an employee may try to show his boss that he has some depth and quality to his character.

Such people display a very different personality in the company of their superficial friends. They have a distinctive way of sitting and standing; they choose different terms when they speak and a different tone of voice, assume different body language and interpret happenings quite differently. When such a person meets public officials, he may sometimes change his personality by such lavish demonstrations of respect to the point that he becomes unrecognizable.

In the same way, such a person, who can easily engage in a superficial conversation with someone who shares his way of thinking, would avoid behaving this way when he is with devout Muslims whose moral character he recognizes. He would avoid the shallow expressions of this culture, pointless and unhelpful chitchat, and making his points with exaggerated facial expressions.

However, his sudden change reveals a very important fact apart from his basic superficiality he actually lives in his soul. That is, these people deliberately and willingly choose their superficial culture and choose to live in the unaware environment it creates. In this matter, they shroud their consciences and feel no sense of discomfort, even though they know that Allah sees what they have become by acting as this debased culture demands and that He witnesses their every moment.

However, this is a weak culture that one can easily get free of, with a genuine intention. A person who decides to live only the moral life of a Muslim can decisively abandon the unawareness that this culture brings. By embracing moral qualities pleasing to Allah and appropriate for life in the next world, a person can go on living as a sincere Muslim with a good moral character. He can stand as an example for others in this regard and may expect a fine reward from Allah.