What is the legal ruling regarding an old man or woman who cannot fast or make up the missed days?

What if the person suffers from a chronic disease such as diabetes or kidney failure? 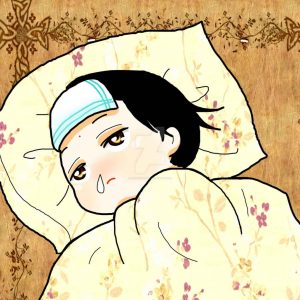 But one among you who is sick or is on a journey shall then fast the same number of other days.

To answer these questions, let us first look at the interpretations of the following ʾaya (verse of the Qurʾan): Allah says:

“It is for a specified number of days. But one among you who is sick or is on a journey shall then fast the same number of other days. Yet for those who are (yuṭīqūnahu) (hardly) able to endure it, and do not fast, the redemption for each day, is feeding an indigent person “instead”.” (Quran 2:184)

Ibn ʿAbbās (may Allah be pleased with him and his father) holds the opinion that the word yuṭiqunahu means that if a person finds it very difficult to fast or cannot fast, they should break their fast and feed an indigent person instead.

The majority of the Companions’ Opinion

However, the majority of the Companions (may Allah be pleased with all of them) say that the above mentioned ʾaya is abrogated.

In fact, the obligation of fasting was gradual. At first, it was optional for a person to fast or to feed an indigent person. Then, fasting became obligatory and the option of feeding was abrogated.

Thus, in the majority’s opinion, the word yuṭīqūnahu means if a person who can fast but chooses not to fast, they must feed an indigent person.

2. He uses the verse as a proof while it is abrogated.

The Majority of scholars hold the opinion that the abrogating verse is the following:

“So whoever among you bears witness to the month shall then fast it. Yet if one among you is sick or is on a journey (such a person shall then fast,) the same number of other days.” (Qurʾan 2:185)

Some scholars also hold the opinion that old age and sickness are legal excuses for breaking one’s fast but the person must feed in indigent person instead.

This is the proof for that:

“After growing old, Anas (may Allah be pleased with him) (was not able to fast and he) used to feed an indigent person bread and meat every day”

In short, there are two opinions regarding the answer to the two questions mentioned above:

1. Feeding an indigent person is a substitute for fasting in case of long-lasting inability. This opinion is more popular as it is better to avoid disagreement.

2. There is no substitute for fasting in case of inability. Feeding is only recommended if a person wants to emulate Anas (may Allah be pleased with him).

If pregnant women and those who breast-feed fear that fasting may cause harm to them or to the fetus or baby, they should break their fast.

What should breast-feeding and pregnant women do if they break their fast?

There are here a number of opinions:

In this case, they are treated as sick people who break their fast and make up the missed days later.

Second, scholars who adopt the opinion of Ibn ʿAbbās mentioned above say that they should break their fast and feed an indigent person for every day.

Third, other scholars like Ibn Ḥazm al-Ẓahirī say that they should break their fast without making up the missed days later or feeding an indigent person for every day.

Ibn Ḥazm used the following Hadith as a legal proof to support his opinion:

Other scholars say that this hadith allows the pregnant and breast-feeding women to break their fast. However, it did not disallow them to make up the missed days. Thus, it is a weak opinion.

The preferred opinion is the first one as it is in agreement with the explicit meaning of the verses related to fasting.