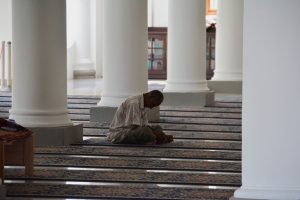 Abdul Aziz bin Abdullah Al Al-Sheikh was responding to people’s queries ahead of Ramadan, which starts next week.

“As it will not be possible to hold Tarawih prayers at mosques this year due to the preventive measures taken by authorities to fight the novel coronavirus, people will have to perform them at home to obtain the virtue of praying during the blessed nights of Ramadan,” said Al Al-Sheikh.

“It has been established that Prophet Mohammed performed these prayers at home, and it is known that Tarawih is Sunnah and not obligatory. If the status quo persists, making it impossible to hold Eid Prayer at mosques, people will have to pray at home and no sermon will follow the Eid prayer.”

He said that the Permanent Committee for Scholarly Research and Ifta had issued a fatwa that it was desirable for whoever missed congregational Eid Prayers to perform it without a sermon following it.

“If making up the prayer for those who missed it with the imam is desirable, this gives us all the more reason to perform the prayer in countries where the congregation is not held because this includes performing the ritual however possible.”

He added that the last date for people to pay Zakat Al-Fitr was before the sunrise of Eid Al-Fitr.

Meanwhile, the secretary-general of the Organization of Islamic Cooperation (OIC), Dr. Yousef A. Al-Othaimeen, said that one of the five imperatives of Shari`ah was saving lives, especially in the face of “an invisible enemy,” where all components of society had the duty to fight it.

He was speaking during a video call held by the OIC International Islamic Fiqh Academy (IIFA) about the global health emergency.

“The participants in the symposium have a great legal and humanitarian responsibility to explain Shari`ah provisions about dealing with this pandemic, raising awareness of its seriousness, and highlighting the licenses and necessities called for in studies of Fiqh of calamities. We also need to urge everyone to adhere to the necessary preventive measures taken by governments to confront this pandemic.”

Observing prayer in congregation for healthy men who are capable of going to the mosque is obligatory according to the consensus of the jurists. Almighty Allah says:

And when you are among them and lead them in prayer, let a group of them stand [in prayer] with you. (An-Nisa’ 4:102)

`Abdullah ibn Mas`ud (may Allah be pleased with him) said, “I have seen the time when no one stayed away from prayer except a hypocrite, whose hypocrisy was well known, or a sick man, but if a sick man could walk between two persons (i.e. with the help of two persons with one on each side) he would come to prayer. And (further) said: The Messenger of Allah (peace be upon him) taught us the paths of right guidance, among which is prayer in the mosque in which the Adhan is called.” (Muslim)

It was narrated from Ibn `Abbas that the Prophet (peace be upon him) said: “Whoever hears the call and does not come, his prayer is not valid, except for those who have an excuse.” (Ibn Majah)

Abu Hurairah also narrated that the Prophet (peace be upon him) said, “No prayer is heavier upon the hypocrites than the Fajr and the `Isha’ prayers and if they knew what is in them (in reward), they would have attended them, even if (it was) crawling. Certainly, I felt the urge to order the muezzin so that he would pronounce Iqamah, then order a man to lead the people (in prayer), then take a flame of fire so that I burn (the houses) upon those who had not left for the prayer yet.” (Al-Bukhari) 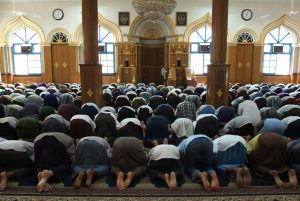 Prayer is the foundation of the religion and the most important pillar of Islam.

Why don’t  we make Ramadan the beginning to enhance our relation with mosques?

It is regrettable to say that many Muslims miss the congregational prayer at mosques without valid excuses. Allah almighty created the humans and the jinn except they should worship Him as mentioned in the Qur’an. Salah (Prayer) is the foundation of the religion and the most important pillar of Islam. It is the first act of worship that  a person will be questioned about on the Day of Judgment. Abu Hurairah (may Allah be pleased with him) narrated that the Messenger of Allah (peace be upon him) said, “The first of man’s deeds for which he will be called to account on the Day of Resurrection will be Salah. If it is found to be perfect, he will be safe and successful; but if it is incomplete, he will be unfortunate and a loser.” (At-Tirmidhi)

A Muslim must offer the prayer on its time with the congregation of Muslims in the mosques for which they were built. Almighty Allah says:

The mosques of Allah are only to be maintained by those who believe in Allah and the Last Day and establish prayer and give zakah and do not fear except Allah, for it is expected that those will be of the [rightly] guided. (At-Tawbah 9:18)

Abu Hurairah (may Allah be pleased with him) narrated that the Messenger of Allah (peace be upon him) said: He who purified himself in his house, and then he walked to one of the houses of Allah for the sake of performing a Fard (obligatory act) out of the Faraid (obligatory acts) of Allah, both his steps (would be significant) as one of them would obliterate his sin and the second one would raise his status.” (Muslim)

We ask Allah, the Exalted, the Almighty, to help us to fast and offer prayer in congregation, and to do acts of worship and to avoid doing evil. Praise be to Allah, the Lord of the Worlds.

Ramadan is coming soon inshallah which means that Muslims are going to fast during the day from dawn to dusk. Ramadan is the most blessed month of the year as it comes with countless virtues and blessings for those who sincerely fast its day and offer prayer to Allah Almighty. Muslims prepare themselves for offering the prayers during the day and the night. In addition to the obligatory five daily prayers, there is special prayer that Muslims offer during the night. These special prayers are called taraweeh in which long portions of the Qura’n are recited. Offering taraweeh is one of the best ways to gain the great blessings and feel the spirituality of Ramadan. 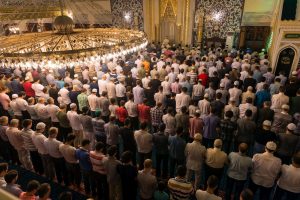 Offering taraweeh is one of the best ways to gain the greet blessings and feel the spirituality of Ramadan.

Taraweeh is originated from an Arabic word that means to relax and rest. Throughout the month of Ramadan, Muslims line up at night to observe a number of optional rak`ahs and listen to and reflect on the recitation of the Qur’an. Offering taraweeh is the Sunnah of the Prophet (peace be upon him) who led the companions in congregation after the time of ishaa’ (Night) prayer for three nights. Since then, this has been a tradition during the nights of Ramadan. Yet, it is not obligatory due to the following hadith narrated by `A’ishah (may Allah be pleased with her):

The Messenger of Allah (peace be upon him) prayed one night in the mosque and people also prayed along with him. He then prayed on the following night and there were many persons. Then on the third or fourth night (many people) gathered there, but the Messenger of Allah (peace be upon him) did not come out to them (for leading the taraweeh prayer). When it was morning he said: “I saw what you were doing, but I desisted to come to you (and lead the prayer) for I feared that this prayer might become obligatory for you. (He the narrator) said: It was the month of Ramadan.” (Agreed upon)

How to Offer the Taraweeh Prayer?

It is highly recommended that Muslims should attend the taraweeh prayer in congregation at mosques after `ishaa’ Prayer. It is also preferred for women to attend these prayer at mosque if they could. However, one may also offer the prayers individually at home. Offering taraweeh in congregation at the mosque enhances the feeling of unity among Muslims.

The proof for the legality of offering taraweeh in congregation is the following hadith,

`Abdu-Rahman ibn `Abdul-Qari said, “I went out in the company of `Umar ibn Al-Khattab one night in Ramadan to the mosque and found the people praying in different groups. A man praying alone or a man praying with a little group behind him. So, `Umar said, ‘In my opinion I would better collect these (people) under the leadership of one Qari (Reciter) (i.e. let them pray in congregation!)’. So, he made up his mind to congregate them behind Ubai ibn Ka`b. Then on another night I went again in his company and the people were praying behind their reciter. On that, `Umar remarked, ‘What an excellent bid`ah (i.e. innovation in religion) this is; but the prayer which they do not perform, but sleep at its time is better than the one they are offering.’ He meant the prayer in the last part of the night. (In those days) people used to pray in the early part of the night.” (Al-Bukhari)

Virtues of the Taraweeh Prayers

There are many virtues and blessing of observing the taraweeh prayers during the month of Ramadan:

1- Taraweeh is one of the best deeds that makes a slave comes close to Allah Almighty and a means for forgiveness of sins.

Abu Hurairah (may Allah be pleased with him) narrated that the Messenger of Allah (peace be upon him) used to urge (the people) to perform (optional taraweeh) prayer at night during the month of Ramadan. He did not order them or make it obligatory on them. He (peace be upon him) said, “Whosoever performs (optional taraweeh) prayers at night during the month of Ramadan, with Faith and in the hope of receiving Allah’s reward, will have his past sins forgiven.” (Muslim)

2- Offering Taraweeh is a revival for the Sunnah of the Prophet (peace be upon him).

3- Offering the Taraweeh with the Imam, until he finishes, is equivalent to spending the whole night in prayers (qiyam al-layl).

It was narrated that the Prophet (peace be upon him) said: “Whoever stands with the Imam until he finishes, it is equivalent to spending the whole night in prayer.” (Ibn Majah)

4- The blessed Laylat Al-qadr is observed at the last 10 nights of Ramadan.

Muslim should strive hard in worship during the last ten nights of Ramadan as in these last nights is laylat Al-qadr, of which Almighty Allah says:

The Night of Decree is better than a thousand months. (Al-Qadr 97:3)

Observing the night prayer during that night has a greet reward as it was narrated that the Prophet (peace be upon him) said, “Whosoever performs Qiyam during Laylat Al-qadr (Night of Decree), with Faith and being hopeful of Allah’s reward, will have his former sins forgiven.” (Agreed Upon).

Abu Hurairah (may Allah be pleased with him) reported: The Messenger of Allah (peace be upon him) said, “He who observes Tarawih prayer (night prayer during Ramadan) throughout Ramadan, out of sincerity of Faith and in the hope of earning reward will have his past sins pardoned..” (Al-Bukhari and Muslim)

Taraweeh prayer is one of the highlighted acts of worship that is offered during the nights of Ramadan after performing the obligatory `Isha’ and before the witr.

The Last 10 Nights of Ramadan