Some virtues of the night prayer

The night prayer is one of the most recommended acts that draw a person near to Allah. It is one of the hallmarks of prophets (Allah bless them and grant them peace) and righteous people. In the Gracious Quran, Allah describes the pious people who are destined for Paradise. They enjoy some attributes which qualify them to be admitted into it. Among these attributes is the following. Allah says,

The best kind of excellence in the worship of Allah is the night prayer as it indicates the sincerity of its performer. Obedient people are described as performing the best act of worship, namely, prayer at the most excellent time i.e. night. Allah says, 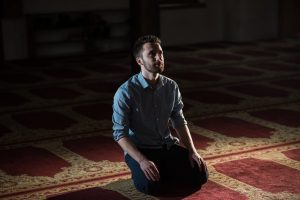 True believers prefer performing the night prayer to sleep. They find more happiness in prayer and in making supplication to Allah at that time.

(Is such a one better), or one who is devoutly obedient (to God) in the watches of the night, bowing (his face) down to the ground and standing (in Prayer), fearing (God’s Judgment in) the Hereafter and imploring the mercy of his Lord? Say (to humankind, O Prophet): Are those who know (God) and those who do not know (Him) equal? (Quran 39:9)

True believers prefer performing the night prayer to sleep. They find more happiness in prayer and in making supplication to Allah at that time. Allah says,

and whose sides forsake their beds (in the night), to call upon their Lord in fear and hope; and who (generously) spend (in charity) from all that We have provided them. Thus not a soul (in the world) can (now) comprehend (the joys) that have been concealed (by God) for every one of them – from all that greatly delights the eyes – (awaiting them) in reward for all (the good) that they used to do (in life)! (Quran 32:16-17)

On the other hand, Prophet Muhammad (Allah bless him and grant him peace) highlighted the excellence of the night prayer when he said:

The most excellent prayer after the prescribed prayers is the prayer that is performed in the middle of night. (Muslim)

The Number of Rak’ahs (units) of the Night Prayer

Prayer during the night should consist of pairs of rak’ahs, but if one of you fears morning is near, he should pray one rak’ah which will make his prayer an odd number for him. (Al-Bukhari and Muslim)

However, some contemporary scholars are of the opinion that a person can pray up to eleven rak’has. Narrated Abu Salama bin `Abdur Rahman:

That he asked `Aisha “How was the prayer of Allah’s Messenger (ﷺ) in Ramadan?” She replied, “He did not pray more than eleven rak`ahs in Ramadan or in any other month. (Al-Bukhari and Muslim)

When to perform the night prayer?

The time for the night prayer starts after performing the ‘Ish (Evening) Prayer until dawn. You can perform the night prayer at the beginning, in the middle, or at the end of night. Narrated Abu Qatadah:

The Prophet (ﷺ) asked Abu Bakr: When do you observe the witr?

He replied: I observe the witr prayer in the early hours of the night.

The Prophet (ﷺ) asked Umar: When do you observe the witr?

He replied: At the end of the night.

However, it is better to perform it at the end of night for the following hadith. Abu Huraira reported Allah’s Messenger (ﷺ) as saying:

My friend (the Messenger of Allah) (ﷺ) directed me to observe fast for three days in every month, to perform two rak’ahs (optional) Duha prayer at forenoon and to perform the Witr prayer before going to bed. (Al-Bukhari and Muslim)

On the other hand, if a person has the ability to wake up at the end of the night, it is better for him or her to perform prayer at that time. Narrated `Abdullah bin `Amr:

How to perform the night prayer?

Prophet Muhammad (Allah bless him and grant him peace) sometimes used to perform the night prayer two by two. Sometimes, he performed four rak’ahs then another four then three at the end.

It is also proved that he performed nine connected rak’ahs sitting at the eighth to recite the supplication of the first tashahhud and at the ninth rak’ahs to recite the second tashahhud.

What to recite when you perform three rak’ahs for witr at the end of your prayer?

It was narrated that Ubayy bin Ka’b said:

“In the first rak’ah of witr, the Messenger of Allah (ﷺ) used to recite: “Highly exalt the name of your Lord, the Most High;” in the second; “Say: O you disbelievers!” and in the third; “Say: He is Allah, (the) One.” (Al-Tirmidhi and Al-Nasa’i)

Du’a’ Al-Qunut (The Supplication of the Standing)

It is so called because a person recites it while standing. This supplication may be made after reciting the sura (chapter of the Quran) i.e. before ruku’ (bowing) or after standing up. It was narrated that Abu Al-Jawza said:

“Al-Hasan said: “The Messenger of Allah (ﷺ) taught me some words to say in witr in Qunut:

You can recite this supplication or any other one because the companions used to recite a different one in the second half of Ramadan.

What to say when you finish your prayer?

On the authority of ‘Abdur-Rahman ibn Abza (Allah be pleased with him) who said that the Messenger of Allah (ﷺ) used to recite in Witr: “Glorify the Name of your Lord, the Most High;” and “Say: O you disbelievers!;’ and ‘Say: He is Allah, (the) One.’ And when he said the taslim, he would say: Subhanal-Malikil-Quddus (Glory be to the Sovereign, the Most Holy) three times, raising his voice with Subhanal-Malikil-Quddus the third time.” (Al-Nasa’i)