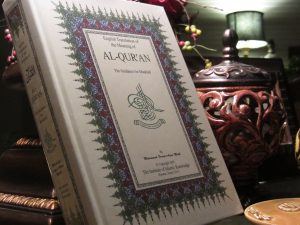 Guess who she is. Those unfamiliar with the Qur’an might suspect that she must be someone related to the Prophet Muhammad — maybe his mother, or his wife, or his daughter. She is, however, none other than Mary, the mother of Jesus.

Jesus himself is also venerated throughout the Qur’an. We read that he was born of a virgin, he was “the Messiah,” and he performed amazing miracles. The Qur’an even calls Jesus “the Word of God” — a very powerful term, especially for those who are familiar with the beginning of the Gospel of John.

These are just some of the many facts that can make a Christian warm up to the Qur’an. However, the same Qur’an also denounces key aspects of Christianity — such as the divinity of Jesus, and the Doctrine of Trinity.

Some of these Qur’anic teachings about the former monotheistic faiths are appreciative. The Qur’an says that Muslims believe in the same God with Jews and Christians, and Muhammad is just another prophet in the line of Abraham or Moses. Other teachings of the Qur’an, however, are critical. Jews are criticized for being disobedient to the prophets God sent to them — including Jesus. Christians, on the other hand, are criticized for divinizing Jesus — who is, for the Qur’an, an exceptionally holy servant of God, but still a servant of God.

Like other faith communities often do about their texts, Muslims often go “selective” about these diverse themes in the Qur’an. Those Muslims who seek harmony with Christians focus on the commonalities between Islam and Christianity. They see the Islamic Jesus, in other words, as a bridge between the two faiths. Other Muslims who are hostile to Christians — out of political grievances, or mere religious bigotry — see the Islamic Jesus as a gap.

A careful re-reading of the Qur’an, however, suggests that the gap might be narrower than even what the mainstream Islamic tradition has considered.

Consider the term, “Son of God,” which the Qur’an condemns. Muslims are typically appalled by the term, seeing it as an insult against God. When one looks at the terminology of the Qur’an, however, a nuance emerges. In Arabic, there are two different terms for “son”: Walad, which is always a biological son, and ibn, which can be a metaphorical son. And while the Qur’an rebukes those who say, “God has a son,” it almost always uses the word, walad. It condemns, in other words, the notion of a deity who has sired a child through sexual intercourse with a woman. No wonder it proclaims: “God has taken neither a wife nor a son.”

When we look at the context of the Qur’an, the discussion becomes clearer. Pre-Islamic pagan Arabs believed in an array of carnal deities who — just like the Greek gods — had wives, daughters, and sons. So, perhaps, the Qur’an’s condemnation of divine filiation was directed at Arab polytheism — Islam’s archenemy — rather than Christianity.

Some medieval Muslim scholars, such as Al-Razi, the great exegete of the Qur’an, had noted this nuance and argued that Jesus’ “sonship” to God was perhaps a metaphor, just like Abraham’s “friendship” to God, a concept with which Muslims have no problem. But today that nuance is lost to most Muslims.

Another bone of contention between Christians and Muslims is the latter’s common denial of Crucifixion. This is based on a much-discussed Qur’anic verse about Jesus that reads: “They did not kill him, nor did they crucify him, but it was made to appear like that to them.” Most Muslim commentators have interpreted this by suggesting that someone else was crucified instead of Jesus— curiously reminding an early Christian heresy called “Docetism.”

However, the Qur’an’s polemic above is directed not at Christians, but a certain group of Jews. It says that Jews did not kill or crucify Jesus. It does not say that nobody else — such as the Romans — killed nor crucified Jesus.

These are just a few of the many points that I call on fellow Muslims to reconsider about Christianity in my new book: “The Islamic Jesus: How the King of the Jews Became a Prophet of the Muslims.” But I also call on Christians to reconsider Islam. One reason is that Islam’s peculiar view of Jesus — venerating him as the prophet and Messiah of God, but not as divine — is rooted within Christianity itself. In particular, “Jewish Christianity,” a heterodox strain in the early Church that followed Jesus as the Messiah but also kept following the Jewish Law, has teachings that strongly resemble those of the Qur’an — a much-overlooked fact that opens intriguing questions about the origins of Islam.

Finally, the most important bridge Jesus offers between Christianity and Islam is his wisdom. The nature of Christ will continue to be a gap between the two faiths, but the teachings of Christ on faith, law, and morals are binding.

Muslims, in fact, desperately need that wisdom today, as I argue, for they suffer from the exact same problem that Jesus saw at the Pharisees of his time: Obsessing about the minute details of religious law while forgetting its moral purposes.

Hence I argue in my book: We Muslims do not worship Jesus as Christians do, yet still, we can follow him. He, after all, is the very prophet whose “Second Coming” is foretold in the Islamic tradition. Maybe that is what Prophet Muhammad really meant when he told his followers: “I am the beginning of this community, and Jesus the end.”

Mustafa Akyol is the author of the newly released, The Islamic Jesus: How the King of the Jews Became a Prophet of the Muslims.