The judiciary is an independent administrative system in the Islamic government oriented to resolve all types of legal disputes among various claimants. The Judicial system is structured to preserve individual rights; assure the establishment of justice among people, stop oppression, and punish the oppressors. The Islamic system follows the directives of Allah and the Prophet  from the Qur’an and the Sunnah (traditions). 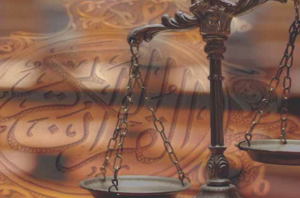 Every individual in the Islamic society, regardless of his faith or religious affiliation, position or social status, has certain immutable rights.

There are specific criteria for a judge applying for a position in the Islamic judicial system. The applicant must be a mature, sane, mentally capable and healthy in order to surmount the difficulties and challenges of his job. He must be well educated and informed about the Shari`ah (Islamic rulings and the principles of lawful and unlawful in Islam), as well as be well aware of mundane affairs so not to be deceived or misinformed.

He should have the ability to give verdicts in both worldly and religious spheres. He must be honorable, dignified, honest and with high moral character. He should be a man of upright conduct so that his judgments are well accepted by the parties in dispute.

Islam prescribes a specific code of conduct for judges that should be observed. The following letter sent by the second Caliph, `Umar ibn Al-Khattab (may Allah be pleased with him) to one of the assigned judges provides the guidelines for all Muslim judges:

“From the second Caliph, `Umar ibn Al-Khattab, the slave of Allah to `Abdullah ibn Qays, As salamu `alayikum. Judgment among (disputing) people is a precise and obligatory act that should be followed and executed properly. You should (try your best to) understand the people present before you.

Furthermore, none will benefit from a right that is not executed. Give equal consideration and seating arrangements to people in your court so as an influential person may not think to take advantage because of his status. Moreover, a weak person will not lose hope of justice in your court. The plaintiff must present a proof of evidence. A defendant must take an oath if he rejected and denied the claim of the plaintiff. Disputing people may choose to compromise between one another. However, no compromise is acceptable if it renders an unlawful item lawful or vice versa. If you pass a judgment one day, but upon reviewing it on the next, you discover that you made a mistake and the right sentence is not what you passed as a verdict, then (reopen the case) and pass the right sentence. You should realize that returning to the right sentence and judgment is (much) better than indulging deeper in falsehood. Try to understand the confusing matters that have no text of scripture to support them either from the Qur’an or the Sunnah (way of the Prophet, peace be upon him) and study the resembling rulings, sentences and cases, and after obtaining the proper knowledge assess your cases. Then choose the most beloved judgment to Allah and closest to the truth in your eyes. Offer a chance to a plaintiff who claims a matter that is not currently present by setting a definite time for him to prove it. If such a plaintiff produces his proof of evidence, adjudicate the case in his favor. If not, then judge against his case. All Muslims are trustworthy insofar as the testimony is concerned except for a person who has been lashed for committing any shameful act in the Islamic society, or a person who is known for false testimonies, or a person who is either a relative or distantly related to the plaintiff. Allah takes care of all hidden secrets of people and helps you (to judge) by providing evidence. Furthermore, you must not worry, become intolerant, or complain about disputing people in the rightful matters where Allah rewards you for being patient and is pleased with the results. If a person has a good and pure soul with Allah, Allah will (surely) improve the relations of that man with the public.” (At-Tirmithi)

Every individual in the Islamic society, regardless of his faith or religious affiliation, position or social status, has certain immutable rights, which include the following:

1- The right to seek judgment against oppressors. An individual may sue his oppressor in the judicial court.

2- The right to have an equal hearing before the judge. This is based on the hadith Allah’s Messenger (peace be upon him), instructing `Ali (may Allah be pleases with him) when he commissioned him as a judge, saying:

“Surely, Allah shall guide your heart and fasten your tongue (to the truth). When the plaintiff and the defendant sit before you, do not issue a verdict for one until you hear the statement of the other as you heard the first.” (Abu Dawud)

3- The right to be considered innocent unless and until proven guilty. The Messenger of Allah said:

“If people are given (judgments) based on their claims, you will see people claiming for the blood of others and their wealth. However, the defendant must offer an oath.” (Al-Bukhari and Muslim)

And in Bayhaqi version of the hadith, it ends:

“The evidence must be produced by the plaintiff and an oath must be offered by the defendant.”

4- The right that mere suspicion does not deprive the suspect from his due process of law and specific rights. For instance, a suspect must not be tortured by any means, nor subjected to violence, cruelty or hardship in order to force him to give any confession. Allah’s Messenger forbade this, by extension, when he said:

Allah absolves my Ummah (nation) from the following: error, forgetfulness and whatever they are forced to do.” (Ibn Majah)

The second caliph, `Umar ibn Al-Khattab stated, “A person would not be responsible for his confession, if you inflicted pain upon him or scared him or imprisoned him (to obtain the confession).” (Abu Yusuf in his book Al-Kharaj)

5- The right that only the guilty will be punished for what is within their personal responsibility. This means that no one is to be held responsible for the faults of others.

Accusation, suspicion, and punishment must be confined to the guilty person and not extended to his family members.

Allah, the Just, says in the Qur’an:

“No one should be taken (guilty) for the wrong doing of his brother of father.” (An-Nasa’i)

The article is an excerpt from the author’s Human Rights in Islam and Common Misconceptions.