Throughout history, the question of resurrection has been a matter of controversy, as it has been clarified in several Quranic narrative dialogues, especially between Prophets and disbelievers. However, the evidence before Prophet Mohammad (Peace be upon him) was mostly concrete and tangible, whereas the evidence during Prophet Mohammad’s era (Peace be upon him) was mostly mental and intellectual. The Holy Quran reports a part of such controversy, in Surat ‘Ya- Sin’, and points out the mental proof that Allah reveals verses of the Quran to Prophet Mohammad (PBUH) so that he can convince the disbelievers who deny resurrection. For instance, (Saboni Vol. III:24) reports that one day ‘Ubay Bin Khalaf’, a hypocrite, came to the  Messenger of Allah Mohammad (PBUH) with old bones in his hand and rubbed them out in front of  the  Holy Prophet’s face and said mockingly: “Oh Mohammad! do you claim that Allah is able to revive us after we’ll be ashes like these?” 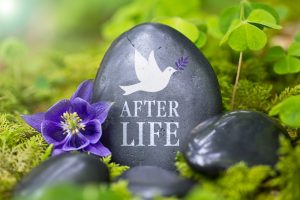 So glory to Him in Whose hands is the dominion of all things: and to Him will ye be all brought back.

Prophet Mohammad (PBUH), realizing that Ubay is a challenging hypocrite, said: “Yes, and He will place you in Fire”. Then Allah (Exalted be He) revealed the following verses: (Ya Sin: 77-83)

(77) Doth not man see that it is We Who created him from sperm? yet behold! he (stands forth) as an open adversary!

(78) And he makes comparisons for Us, and forgets his own (origin and) Creation: He says: “Who can give life to (dry) bones and decomposed ones (at that)?”

(79) Say, “He will give them life Who created them for the first time! for He is Well-versed in every kind of creation!-

(80) “The same Who produces for you fire out of the green tree, when behold! ye kindle therewith (your own fires)!

(81) “Is not He Who created the heavens and the earth able to create the like thereof?” – Yea, indeed! for He is the Creator Supreme, of skill and knowledge (infinite)!

(83) So glory to Him in Whose hands is the dominion of all things: and to Him will ye be all brought back.

Though man’s power is too limited to enable him to know many things inside and around himself; he disputes with his Creator Allah (the All- knowing); whose power is so absolute that“His Throne doth extend over the heavens and the earth and He feels no fatigue in guarding and preserving them for He is the most high, the supreme (in glory)”. ( Baqara: 255)

This Divine address to mankind guides Muslims, as Baz brings forth, to: “contemplate about Allah’s absolute ability of creation”, to be thankful and grateful to Allah, to recognize the foolishness of disbelief and the deterioration of disbelievers, and to call well for worshipping Allah.

Ali (1934:1187) wonders of “man’s disobedience and folly” He adds that man who is “created out of something that is less than a drop in the vast ocean of existence has the hardihood to stand and dispute with his maker, and institute idle comparisons.” See (Yasin:78)“He says: “Who can give life to (dry) bones and decomposed ones (at that)?”Ali adds, “Man certainly cannot, and no power in nature can do that”.  Does he forget that the One (the Creator) who created them for the first time is able to recreate them in the Hereafter. Allah (Exalted be He) reveals to Prophet Mohammad (PBUH) to answer the disbelievers in a rational, convincing manner:“Say, He will give them life Who created them for the first time! for He is Well-versed in every kind of creation!“ (Yasin: 79)

(3)”Does man think that We Cannot assemble his bones?

(4)Nay, We are able to put together in perfect order The very tips of his fingers”.(Qiyamah: 3-4)

So, Man should not strike such an example that equalizes between the creature and the Creator,“And he makes comparisons for Us, and forgets his own (origin and) Creation”.(Yasin:78)

Nothing is impossible or difficult to Allah; as His power is absolute,“Verily, when He intends a thing, His Command is, “Be”, and it is!” (Yasin:82)

Al Baz (2007) states that there is nothing difficult or easy, and there is nothing near or distant in front of the word of Allah ‘Be’, weather it is heaven or earth, ant or mosquito. Just when the will of Allah is directed toward creating something, it is quite sufficient to exist whatsoever it is.

“So glory to Him in Whose hands is the dominion of all things: and to Him will ye be all brought back” (Yasin: 83), for reckoning and reward. Thus Allah (Exalted be He) closed Surat ‘Ya- Sin’ with such powerful seal that denotes the perfection of the Might and the greatness of the dominion only possessed by the Creator of Universe.

It can be concluded out of this Holy Quranic didactic dialogue that there are six Quranic proofs on the ability of Allah to give life to dead people on the day of resurrection:

“He will give them life Who created them for the first time!”

” He is well-versed in every kind of creation!”

“Who produces for you fire out of the green tree, when behold! ye kindle there with (your own fires)!”

“Is not He Who created the heavens and the earth able to create the like thereof?”

On the authority of Abu Hurairah, Prophet Muhammad (PBUH) says “Whole Adam’s son is eaten by earth except the tailbone, from it he was created and out of it he will be constructed.” (Sahih Muslim)

Those who deny resurrection claim that once man dies and his body starts to decay and changes into soil, the whole body will vanish and it will never come back to life again. However, the modern scientific researchers prove clearly the possibility of life after death as they have carried out several scientific researches on human tailbone.

Answering–Christianity.com reports that the scientists tested the human tailbone and exposed it to the strongest factors of radiation, grinding, pressure and heat and other factors, yet this part of human body remained consistent with the same chemical construction despite all the circumstances. Thus, the most recent scientific researches prove that the first cipher or genetic code from which man has been already created exists in the very finite tiny part of the coccyx.

It is quite clear that the scientific evidence of the coccyx matches with both the Quranic and the Prophetic evidences; which drives those who deny resurrection to open their minds and hearts to the truth and realize that what the Quran states is true and what Prophet Muhammad points out is also true. In view of that, the way to belief in Allah (Exalted be He) and in his Prophet (PBUH), as well as in resurrection has become quite paved and easy for normal and sensible people.