Anyone possessed with basic common-sense would accept that no enterprise, whether big or small, can run smoothly unless a single person is made ultimately responsible for its progress.

Have you heard of a single school with two headmasters, a department with two directors, an army with 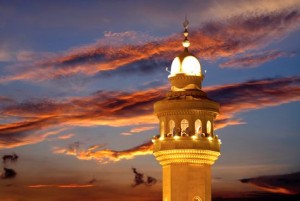 The Unity of God

two commanders-in-chief, or a country with two presidents? Could any institution under such dual control function efficiently?

Even in everyday life, we are aware that “too many cooks spoil the broth”. Any project left under the leadership of more than one person cannot be managed properly – they will bicker and squabble until the work is ruined. However good the team spirit may be, good management, smooth working and efficiency are inconceivable without the presence of a single authority in ultimate control.

Reflect on the Universe

Bearing this simple, common-sense fact in mind, take a look around you at the grand system of the universe. Look at the planets in constant motion, the earth on which you live, the moon which rises in the evening and the sun which rises at dawn; their movements indicate a strict set of rules or laws. Have you ever found evening setting in or the sun rising before the natural hour?

Has the moon ever collided with the earth?

Has the sun ever deviated from its fixed position?

Have you ever heard of a planet deviating from its fixed course by even a hair’s breadth?

Like the parts of a watch, these millions of heavenly bodies, some of which are thousands of times bigger than our own earth or sun, are following their appointed courses strictly in accordance with the “laws of nature”. The distances between them, and the direction and speed of their movements, are fixed, and even the slightest deviation of one of them would throw the entire system into chaos.

Moving down from the heavens to our own earth, let us look more closely at the world in which we live, and at our own selves. The whole system of the earth and the drama of life which we see enacted upon it are governed by certain strict rules. For example, the gravitational pull of the earth keeps everything on it in its proper place. If the earth were to relax this hold for even a second, the world would quite literally fall to pieces. All the wheels and cogs of the world’s vast workshop are governed by a rigid set of regulations, which cannot be altered in the least. Air, water and light obey the laws laid down for them; the seasons of the year adhere strictly to the schedule set out for them.

Rocks, metals, electricity, trees, animals… nothing has the power to overstep the boundaries within which it is required to exist by the laws which govern it. Nothing can change its qualities or properties, or refuse to discharge the duties assigned to it. Within the limits set, all parts of this vast machine are co-operating with one another, and every event and development we witness is due to this co-operation.

Take the apparently insignificant example of a seed which has been sown in the ground. It is obvious that the seed cannot germinate and grow unless everything else in heaven and earth cooperates in sustaining it and aiding its development. The soil has to provide it with the necessary heat and light. Water and air also have their part to play. The night makes it cool and provides dew; the day brings warmth and helps it to germinate and grow. The various elements cooperate for months, even years, on end, until the plant reaches maturity and bears fruit. All the crops which provide our food and sustenance grow as a result of this cooperation between the various forces of nature.

Indeed, we are only alive because of this natural cooperation which sustains us. If the cooperation of any of these elements was to be withdrawn, life would become virtually, if not absolutely, impossible. If, for example, the air were to withdraw itself from this cooperative enterprise, we would instantly cease to exist. If water refused to act in harmony with the air and heat in the atmosphere, there would be not a drop of rain. If the soil did not co-operate with water, our gardens and fields would dry up, our crops would never ripen, and we would never be able to build houses. If fire refused to be kindled, all our ovens, mills and factories would grind to a halt. If iron refused to react to fire, we would not be able to make a needle or a knife, not to mention cars, trains and heavy machinery.

In short, the world in which we live exists only because of the interdependence and cooperation of the various elements and “departments” of the world around us.

Could anyone find anything wrong or false in the statements made above?

If it is all true, and supported by our own observations, is it not natural to wonder about the “raison d’être” of this whole grand scheme, with its regularity and harmony, this perfect co-operation between the myriad elements and forces of the universe? The cosmos has existed as such for billions of years; trees and animals have existed on the earth for millions of years; mankind has lived on earth for thousands of years. But the system of the universe has never experienced any disruption. The moon has never fallen upon the earth, or the earth collided with the sun. The fixed duration of day and night has never altered, and soil and water, fire and heat have continued their appointed partnerships.

One is bound to wonder, why do all the various “departments” of this vast realm adhere so strictly and faithfully to the rules and regulations laid down for them? Why do they not fall foul of one another? Why is there no disorder or disturbance in this system? What is the force that keeps its various parts under the control of a single administration?

You only have to search your own hearts for the answers. Don’t you feel intuitively that a single Divine Being is the sovereign of the universe, and that it is the supreme power of this single sovereign that keeps everything in the universe subject to His own laws and regulations? If this universe were governed by two gods let alone several – its affairs could not possibly have been run so regularly and efficiently.

If even a small enterprise such as a school or business cannot be run by two leaders at the same time, how could the vast realms of the heavens and earth be run by more than one sovereign?

In short, it is a fact that the universe did not come into existence by itself, and that it is not functioning spontaneously. The universe has been created, and is being run, by a single Being.

The regularity, precision and efficiency with which it is being run, and the adherence of all its components to its laws leaves no room for any doubt that it is under the control of a single administrator. The strictness of the laws of the universe bears testimony to the fact that a single sovereign rules the heavens, the earth and everything in between. The sun, the moon and the stars, the earth and all that it contains – rivers, trees, mountains, animals – are all under His command. The life and death of human beings are in His hands. He has full control over the whole world, and nothing is able to enforce its own will in the kingdom of God.

The perfect order of the universe precludes the existence of more than one administrator. The very nature of its organization demands that no other being should have a share in His authority, that there should be a single ruler and that all other beings should be His subjects. If any other being enjoyed even a fraction of the original authority, disorder, indiscipline and chaos would surely follow.

Moreover, the administration of such a vast realm demands not only power, but also knowledge. It requires such a vision as can encompass the whole universe at one time, and a mind so comprehensive that it can issue commands and directions whilst keeping in view the needs and demands of the entire system. The organization of the universe would surely have been disrupted if some lesser “deities”, not endowed with this universal vision, had been allowed to share the sovereignty of the universe with the supreme Lord and Master, and been entrusted with authority over particular matters and certain parts of creation. Even a simple machine is likely to be thrown out of gear if it is entrusted to a person who does not know how to operate it and tries to interfere with its workings.

With regard to the greater system of the universe, the very fact that it is being run with complete efficiency and order should make it clear that no force or being shares even the slightest degree of the sovereignty of the universe with God. This is not merely a statement of fact. It is also right and proper that God’s sovereignty over the universe should not be shared with any other entity and that His law alone should govern the entire realm.

Those who are God’s own creatures, who depend entirely upon His mercy for their very survival, who cannot live for a second by virtue of their own capacities, are surely not competent to share His sovereignty.

Could a servant share his master’s right of ownership? Would a master share his power or rights with his servant? Such a situation is not only unacceptable according to the patent realities of the universe; it is also repugnant to reason, nature, truth and logic.

Abul A`la Mawdudi (1903-1979) was one of the most eminent Islamic thinkers, reformers, and scholars of the last century. His thought has spread all over the world and greatly influenced the work of Islamic da`wah. His books and articles covered most topics that needed guidance for the revival of Islam. He also wrote many articles on the critique of the Western thought and strategy of Islamic da`wah which were published in the journal he started in 1932 called Tarjuman al-Qur’an.