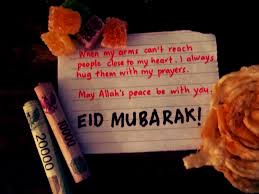 Among the other noble meanings of Eid are mercy and kindness. What a great society it is whose people show mercy to each other!

Eid is a very special day which brings new meaning to our life. It is completely different from other days. Although it lasts for a short time, one may do many things in it that cannot be achieved over long years. This is out of the blessings of Allah The Almighty on people when He made the Days of Eid for them and made it a point of agreement among them. Eids are days that come after blessed seasons that are full of abundant goodness and mercy. What a great blessing of Allah The Almighty on His worshipers this is! He enabled them to end such seasons by the two Days of Eids. Allah The Almighty revealed the two Days of Eid to the last Prophet (Peace and blessings be upon him) as they had many beautiful meanings and abundant goodness for every individual and for society as a whole.

Eid has many noble and valuable meanings that make everyone happy. Thus, everyone has his own goals and wishes and seeks to achieve them by making the best use of their blessings. However, the best of these wishes is what is done sincerely for the sake of Allah The Almighty and that which is beneficial for all people without limiting the wishes of people as long as they are lawful, for there is no idea without an aim and no soul lives without hope.

The following are some of the noble meanings of Eid: unity and the feeling that all Muslims are like a single body. In fact, we are in dire need for the meaning of unity to prevail throughout this vast nation. The best form of unity is to refer, in judging and settling disputes, to only one system. Among the other forms of unity is that the ruler must not deprive his people of their rights and that people should fulfill their duties towards their rulers and nation. The different forms of unity entail that one should be open-minded to consider and accept any sound opinion or reasonable views without blame or punishment. Besides, no group of people should be wronged because of territorial, social, or sectarian reasons. Furthermore, the rulings of Shari`ah (Islamic legislation) and the requirements of public interest should be taken into consideration.

It is time we pay great attention to the matter of unity in conformity with the pure Shari`ah (legislation) of Islam. What a great dream it is that can unify those who strive in the cause of Allah The Almighty in the occupied territories under a single banner and common noble aim that can be expressed by expelling the aggressors and applying the Word of Allah The Almighty. Eid is a great chance to heal the rifts that may afflict families, settle disputes among people, and restore harmony and compassion to disturbed marital life.

Among the other noble meanings of Eid are mercy and kindness. What a great society it is whose people show mercy to each other! There are many poor people who do not possess their daily provisions and can do nothing to stop the tears of their children. According to the principles of natural mercy, there should be no person suffering from hunger found around those who lead an unimaginably luxurious life. In Muslim societies, there are orphans who have lost their main breadwinner and are deprived of a father’s kindness, advice and love. Although there are many institutions that exert tremendous efforts in taking care of orphans and showing kindness to them, we tend to forget the virtues of this deed and are in constant need of reminders.

Similarly, there are many widows or divorced women who lose their beauty over time and are troubled by people. In spite of the large number of matrimonial institutions and their great efforts in this field, not enough attention is paid to these two categories of women until they became easy prey to evil men who only seek amusement at their expense. There are also many people in jails and detention camps who are denied the happiness of Eid, for the bars surrounding them prevent happiness from entering therein.

Eid without unity and solidarity will be meaningless. The best kind of unity is that which has mass support. Can our ideas help us to unify? Will we live to see the faithful person who will restore the balance of the media and show mercy to our society from those who are trying to separate society from its religion, alter its values and divide its people? Will we live to see a public unity born by disseminating the noble meanings of mercy and unity throughout society to get rid of evil wherever it is, without public mischief, unrest, misguidance, or frightful corruption? Can we develop men and women who can bear the burdens of the different classes and sections of society, in order to reform and build it even if this takes a long time?

It is the norm that the truth usually reappears after its disappearance and returns after absence. It is not difficult at all for Allah The Almighty to bless us so that our collective efforts enter every lane and house carrying the seeds of mercy and the roots of unity so that we may begin another stage of progress and reform.