After pronouncing the Shahadah, it is from the Sunnah that a person do the following things: 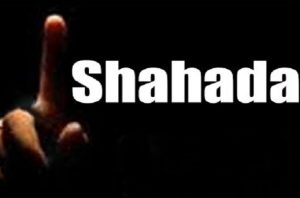 It is recommended that one perform a complete bath (ghusl).

nd then perform a prayer consisting of two rak`ahs. In a hadith, a person named Thumamah Al-Hanafi was taken captive while he was a disbeliever. The Prophet (peace be upon him) would repetitively approach him saying:

“What do you say, O Thumamah?” He would say, “If you decide to kill me, you would be killing (in right) because I have killed; if you let me free, you would be letting free one who shows gratitude; and if you desire wealth, we will give you what you please.” The Companions of the Prophet liked to ransom captives, and so they said, “What would we gain if we killed him?” So finally one day, the Prophet decided to set (Thumamah) free, and [upon that] he accepted Islam. The Prophet untied him and sent him to the walled garden of Abu Talhah, commanding him to take a complete bath (ghusl). He performed a complete bath and prayed to rak‘ahs, and the Prophet said, “Your brother’s Islam is sincere.” (Sahih ibn Khuzaimah)

– The Intention (Niyyah). One must intend in his heart that he is performing ghusl to remove himself from a major state of impurity – whether janabah (a spiritual state of impurity which one enters after having sexual intercourse, or after ejaculation of men or the release of orgasmic fluid for women), menstruation or postpartum bleeding – without uttering such intention vocally.

– He should wash his hands, and then his private parts removing the filth.

– Next, he should perform a complete ablution (wudu’) as he would for the Prayer. He may delay washing his feet until the end of his ghusl.

– He should pour (at leas) three handfuls of water on his head, running his fingers through his hair and beard so that water reaches the roots of his hair and scalp.

– Then he should pour water over the rest of his body, rubbing it, beginning with the right side and then the left. He should take care that water reaches his armpits, ears, navel, and in between the folds of the skin if he were fat, for these folds of flesh which form in the obese prevent water from reaching the areas of skin concealed within the folds, and thus may remain dry. He should then wash his feet if he had not already done so while making wudu’ (before performing the ghusl). `A’ishah (may Allah be pleased with her) reported:

“When Allah’s Messenger (peace be upon him) would perform ghusl due to sexual intercourse, he would first wash his hands, then pour water with his right hand into his left, washing his private parts. After that he would perform wudu’ as he would for the Prayer, and then take water and rub it in to the roots of his hair with his fingers. (Lastly) he would wash his feet.” (Muslim)

Ghusl becomes obligatory after one of the following things:

1- Ejaculation, whether the semen of men or the fluid released by women upon having an orgasm, due to desire, nocturnal emission, or the like.

2- Sexual intercourse, even if it does not result in ejaculation.

3- Following the cease of one’s menses, and

The article is an excerpt from the author’s book “How to Become a Muslim”.